On 8 August 2014, the World Health Organization (WHO) declared the Ebola virus disease outbreak in West Africa a Public Health Emergency of International Concern (PHEIC) in accordance with the International Health Regulations (2005).​

The International Maritime Organization (IMO) has joined the international adhoc Ebola Travel and Transport Task Force and is working with other United Nations agencies and non-governmental organizations to monitor the situation and provide timely information in response to the outbreak of the disease.

The Committee reiterated its recommendation that there should be no general ban on international travel or trade. A general travel ban is likely to cause economic hardship, and could consequently increase the uncontrolled migration of people from affected countries, raising the risk of international spread of Ebola. The Committee emphasized the importance of normalizing air travel and the movement of ships, including the handling of cargo and goods, to and from the affected areas, to reduce the isolation and economic hardship of the affected countries. Any necessary medical treatment should be available ashore for seafarers and passengers.

Previous recommendations regarding the travel of EVD cases and contacts should continue to be implemented.

A number of States have recently introduced entry screening measures. WHO encourages countries implementing such measures to share their experiences and lessons learned. Entry screening may have a limited effect in reducing international spread when added to exit screening, and its advantages and disadvantages should be carefully considered.

If entry screening is implemented, States should take into account the following considerations: it offers an opportunity for individual sensitization, but the resource demands may be significant, even if screening is targeted; and management systems must be in place to care for travellers and suspected cases in compliance with International Health Regulations (IHR) requirements.

A number of States without Ebola transmission have decided to or are considering cancelling international meetings and mass gatherings. Although the Committee does not recommend such cancellations, it recognizes that these are complex decisions that must be decided on a case-by-case basis. The Committee encourages States to use a risk-based approach to make these decisions. WHO has issued advice for countries hosting international meetings or mass gatherings, and will continue to provide guidance and support on this issue. The Committee agreed that there should not be a general ban on participation of competitors or delegations from countries with transmission of Ebola wishing to attend international events and mass gatherings but that the decision of participation must be made on a case by case basis by the hosting country. The temporary recommendations relating to travel should apply; additional health monitoring may be requested.

All countries should strengthen education and communication efforts to combat stigma, disproportionate fear, and inappropriate measures and reactions associated with Ebola. Such efforts may also encourage self-reporting and early presentation for diagnosis and care.​ 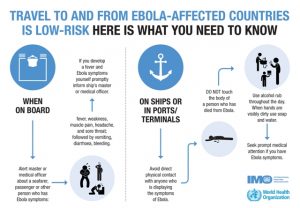 Information and guidance can be downloaded form this web page. Updated information will be posted when it becomes available.