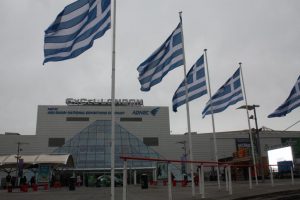 Tourism receipts in Greece are running at record highs, the country’s minister of tourism Olga Kefalogianni told a press conference on the opening day of the World Travel Market, a key industry event, in London.

Ms Kefalogianni declared: “Tourism in Greece has regained the place it deserves.” She said that the industry was contributing almost 20% to the nation’s gross domestic product. “Tourism can play a crucial role in the recovery of the national economy.” 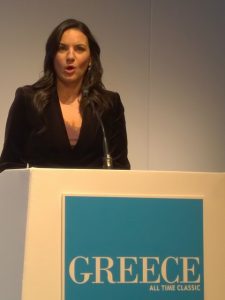 Referring to the trauma of austerity that shook Greece in recent years, the minister asserted: “We have to show that Brand Greece is beyond any temporary circumstances.” She said that while Greece remained  for many visitors as being about “sea and sun” it was being marketed as “a multi-layered series of products.”

Questioned on what was being done to assist the tourism sector capitalise on the national heritage of its great shipping industry by developing marinas and facilities for cruise ships, Ms Kefalogianni said that infrastructure matters were dealt with elsewhere in the government.

Asked about reports of yachts being laid up because their owners considered them too expensive to run because of excessive taxation, Ms Kefalogianni said that this had been the case some years ago, but there was a new framework for yacht owners and for yachting in general, and the aim was to attract more yachts.

Panos Livadas, general secretary of the Greek National Tourism Organisation, detailed the records achieved in 2014, which exceeded even what had been all-time highs the previous year. There were more than 20m arrivals in 2014, or if cruise ship passengers were included, 22m. Revenues were Euro14bn, and 700, 000 people worked directly and indirectly in the tourism sector.

Mr Livadas said there were three reasons for the progress. First was the political stability of the past two years, “which laid the necessary foundation for us to unfold our policies and initiatives to meet these numbers.”

Second were the reformist legislative and other initiatives of the minister of tourism “that more radically cut down red tape and facilitated ongoing and new investments.”

Third was the Greek National Tourism Organisation’s strategic shift in communication towards the internet, the online providers and social media. Potential visitors from every corner of the globe were going to the web, “and that is where the great battles of the competition are fought.”

Mr Livadas concluded: We believe that Greece’s two last, back-to-back, record years were a vote of confidence for our country… Because of the crisis and the difficulties of the last five years, it could not have come at a better moment.”