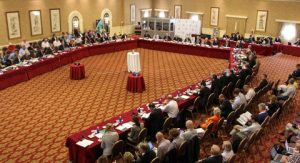 8 November 2014 – Issued on behalf of ISAF – The 2014 ISAF Annual Conference has drawn to a close in Palma de Mallorca, Spain.

From 1-8 November 2014 more than 500 delegates from over 70 nations gathered in Palma to discuss, debate and decide on the decisions that will take the sport forward into 2015 and beyond.

ISAF Council, the final decision making body of ISAF, met on 7 and 8 November to vote on the recommendations for the expert committees. The 2014 Annual General Meeting brought the Conference to a close.

The final day format for the 49er and the 49erFX was a hotly discussed topic with a lengthy debate. ISAF Council voted for one double points Medal Race without boundaries and a target time of 20 minutes.

It was also decided that all supplied equipment at the Rio 2016 Olympic Sailing Competition should be distributed after a public draw, ensuring transparency.

As part of the Rio 2016 Olympic Sailing Competition Qualification System, ISAF included Continental Qualification Events in the pathway to help develop sailing around the world. Reflecting the IOC Qualification System Principles the key requirements are to ensure participation of the best athletes and ensure universality through continental representation.

ISAF Council agreed on the recommendation from the Events Committee on the regattas that will be held in 2015 and 2016.

The Disabled Sailing Committee will be responsible for the Paralympic Sailing Competition including events and equipment selection, the IFDS World Championships and administration.

Disabled Sailing Committee representatives will liaise with other committees to offer their specialist expertise.

The merger creates a single governing body for MNAs and sailors to better serve the needs and interests of sailors with disabilities.

Submission 025-14 was withdrawn in advance of the ISAF Council meeting but with an agreement that the implementation of a revision to the system would be discussed between the Executive and the ISAF Sailor Classification Commission.

The following events and equipment for the 2017 ISAF Youth Worlds were also agreed by Council:

The Equipment Committee recommended the new Nacra15 for the Open Multihull event and this will be discussed at the 2015 ISAF Mid-Year Meeting in the Netherlands with the earliest possible introduction of the new equipment being 2018.

ISAF welcomes Macau and Montserrat to the ISAF family. Both were awarded associate member status.

Submission 127-14 as amended by the Racing Rules Committee was approved effective 1 January 2015. Other amendments to the Racing Rules and Equipment Rules of Sailing were approved following recommendations from the expert committees. The changes will be incorporated into the next edition of the rule books published for 2017-2020.

The Equipment Committee, Events Committee and Executive Committee will meet at the 2015 Mid-Year Meeting in Muiden, Netherlands from 7-9 May 2015 with the 2015 ISAF Annual Conference to be held in Sanya, China from 7-14 November 2015.

Full details of all the decisions made at the ISAF Annual Conference will be published in the minutes of the meetings for the ISAF Council and all ISAF Committees, which will be published on the ISAF Meetings microsite at www.sailing.org/meetings in the coming weeks.

The Shipping Markets: After … “euphoria”, stagnation, or correction…?