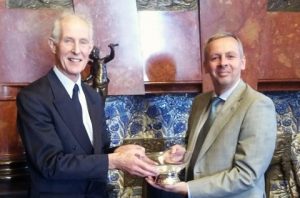 The Maritime Foundation is a charity promoting Britain’s interests across the entire maritime sector. Its purpose is to inform and raise public and parliamentary awareness of the importance of Britain’s maritime industries, commerce and defence through education, training and research, as well as through the Foundation’s annual Maritime Media Awards.

Julian Parker OBE, Chairman of the Organising Committee said: “This year the Trustees were unanimous in their choice of a leader who has tirelessly worked not only to develop his own organisation, but also raise the profile of the maritime sector and drive his vision to bring government, business and academia together for the benefit of society.

“The cornerstone of this vision is the world class Lloyd’s Register Global Technology Centre on the University of Southampton campus, which opened its doors last month. This research and development capability operates in tandem with LR’s Global Technology Centre in Singapore, and over 40 research institutions around the globe that are funded by the Lloyds Register Foundation.

“The Trustees further wish to recognise his foresight and long term vision in seeking to raise the profile of  the maritime industry at all levels from school leaver to ministers in government. As a Chief Executive with a background in naval architecture he has been able to instil a unique sense of purpose ‘ Working together for a safer world’.

“In pursuit of this aim his organisation commissioned an authoritative study into ‘Global Marine Trends 2030’ which demonstrated the close link between shipping, energy and trade until 2030. He was a driving force and first co-chairman of the Maritime Leadership Council which has sought to bring together representatives from all aspects of marine industry to engage with government.

“Through his organisation’s parent company, the Lloyds Register Foundation which he was instrumental in establishing in 2012, he is now providing a long term step change in investment in technology, skills and education to enhance future maritime capability.  The quality which makes this project so special is that it is technical but focused on people and benefits to the community.”

Countess Mountbatten of Burma, CBE MSC CD DL President the Maritime Foundation, said “I cannot think of a  more deserving candidate to receive the Maritime Fellowship Award 2014. It is only through the leadership and courage of people like Mr Richard Sadler that we can re-affirm our reputation as a maritime nation.”.

Richard Sadler said on receiving the award, “I am very honoured to receive this award.  We all have an obligation to drive the industry towards better dialogue with government, to speak with one voice, and get government to recognise the importance of UK maritime and the need for a cohesive maritime strategy.”

About LR
Lloyd’s Register (LR) is a global engineering, technical and business services organisation wholly owned by the Lloyd’s Register Foundation, a UK charity dedicated to research and education in science and engineering. Founded in 1760 as a marine classification society, LR now operates across many industry sectors, with over 9, 000 employees in 78 countries.

LR has a long-standing reputation for integrity, impartiality and technical excellence. Our compliance, risk and technical consultancy services give clients confidence that their assets and businesses are safe, sustainable and dependable. Through our global technology centres and research network, LR is at the forefront of understanding the application of new science and technology to future-proof our clients’ businesses.

About the Maritime Foundation
The Maritime Foundation is a charity promoting Britain’s interests across the entire maritime sector. Its purpose is to inform and raise public and parliamentary awareness of the importance of Britain’s maritime industries, commerce and defence through education, training and research, as well as through the Foundation’s annual Maritime Media Awards.