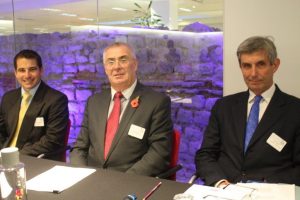 Evidence has emerged of sentiment in the marine insurance market that one of the long-established rules of practice governing General Average should be re-written.

An informal show-of-hands vote among underwriters and adjusters attending a London debate favoured clarification of how expenses should be shared after ships in ballast that are on time-charter become casualties. This would mean revision of Rule of Practice B26 (which dates back to 1896), part of a code of strongly-recommended guidelines used by members of the Association of Average Adjusters.

Differences of view that were aired at the meeting, hosted in the City by the International Underwriting Association for the Association of Average Adjusters, indicated that revision will be no easy task.

General Average is a hallowed system under which highly qualified average adjusters apportion casualty expenses – broadly speaking the costs of proceeding with the voyage and getting the cargo to destination – between the relevant parties.  At its centre is the common safety and preservation of property (ship and cargo) involved in what is known as the “common maritime adventure.”

General Average is incorporated into contracts of carriage often through the York-Antwerp Rules 1994, but recent experience has highlighted the dilemma that the Rules do not specifically deal with vessels in ballast.

During the IUA/AAA meeting, the audience took a majority view in another show-of-hands vote that the shipowner’s General Average allowances should not be limited when charterers change a voyage because of the disruption and need for repairs.

Referring to sharply divergent opinions among adjusters, Keith Sturges, a director with the London and Piraeus offices of adjusting firm Richards Hogg Lindley, said: “It is not at all satisfactory that three or four very different General Average adjustments could emerge, when the circumstances are the same in each case, other than the date on which the charterers chose to communicate their change of intentions to the shipowner. What is important is that we should all reach a consensus.”

Championing a liberal interpretation of the coverage of expenses in such cases, Mr Sturges asked: “Why should the owner’s entitlement to claim on his hull policy be totally at the mercy of the whim of the charterers when the owner himself has rightly and properly fulfilled his obligation of repairing his ship, preserving the property on board and returning the vessel to service with the charterers?”

He declared that if a ship is repaired at a port of refuge and the time charterer decides to go to a different loading port from that first intended, “the charterer’s change of intentions does not amount to a destruction of the common adventure.”

Despite the fact that many General Average cases involve ships on time charter, “there is not a single reference to charters anywhere in the [York-Antwerp] Rules, nor any apparent recognition in the rules that charters even exist. I don’t expect this to change in the new 2016 Rules, ” he said, referring to possible revisions that are still under discussion.

Mr Sturges said: “If we can seek any guidance from the York-Antwerp Rules, they are actually telling us that the General Average is not prematurely terminated provided a [with emphasis on the word ‘a’] voyage continues from the port of refuge with property still on board. Time charterers’ bunkers are property.”

His personal view was that allowances should continue through to the ship regaining position, and that should be so in all cases where the vessel is returned to time charterers’ disposal after repairs at the port of refuge.

Tristan Miller, of the adjusters Harvey Ashby,  argued for a stricter approach – Rule of Practice B26 only applies to British policies of insurance; policies not subject to British law and practice will have only the York-Antwerp Rules to guide them, and it was clear that the allowances will end on the termination of the original voyage under the York Antwerp Rules.  “It makes sense for British policies to have the same interpretation, rather than widening coverage unnecessarily, ” he added.

Mr Miller viewed Rule B26 as providing a consistent basis on which to establish allowances, clarifying what the contributing interests are in each case, and where the ‘adventure’ is considered to end, unless through circumstance the ‘adventure’ has been ended short of final destination. In all other circumstances, general allowances are only incurred whilst the vessel is on her original voyage and it seems appropriate the adventure should be limited to the original voyage for vessels proceeding in ballast under time charter as well.

He said that when the Association’s advisory panel considered the question in 2013, the panel decided that the ‘adventure’ should be the original intended voyage and the majority of the panel concluded that General Average allowances should cease on the date of the change or cancellation of the intended voyage, even if the vessel subsequently proceeded to the same port. But the panel was unanimous that if the charterparty itself is cancelled, the adventure terminates on that date.

The panel was concerned though that, as Mr Miller put it, “it is perhaps unfair and somewhat artificial that a shipowner’s claim in General Average hinges on what the charterer may do for his own commercial reasons.”

Paul Silver, a director of Richards Hogg Lindley, who chaired the meeting, said that considerable sums of money could be at stake in the type of cases discussed involving time-chartered ships in ballast: expenses could add up to $300, 000 or more. Mr Silver stressed that the Association’s rules of practice were designed to promote uniformity in settling marine insurance claims.

The Rules of Practice are non-binding, but if an average adjuster draws up a statement which is at variance with a Rule, he or she must place a note in their adjustment explaining why they differ from it.

The Association of Average Adjusters (http://www.average-adjusters.com) promotes principles in the adjustment of General Average, uniformity of practice, and the maintenance of high standards of professional conduct. Irrespective of the identity of the instructing party, the average adjuster is bound to act in an impartial and independent manner.

Its examinations are known for their rigour, and success earns for the member the designation of Fellow of the Association of Average Adjusters, a title recognised internationally as a gold standard of excellence.