Seafarers UK – the charity that supports seafarers in need across the UK Merchant Navy, Fishing Fleets, Royal Navy and Royal Marines – has announced that sales of Seafarers Ale have this year resulted in brewer and premium pub company Fuller, Smith & Turner PLC (Fuller’s) making a donation to Seafarers UK of more than £30, 000.

Fuller’s acquired the Gale’s-branded Seafarers Ale in 2005; ever since a donation per pint sold has been made to Seafarers UK. The total raised to date exceeds £170, 000, money that contributes to Seafarers UK’s annual grants of £2.5 million, paid to charities, organisations and projects that support seafarers in need, their families and dependants.

This year’s donation of £38, 676 took place recently (October 21) at the opening of The Admiralty, Fuller’s new pub on London’s Trafalgar Square, where Seafarers UK’s Director General Barry Bryant met with guest of honour The Admiral Lord West of Spithead, himself a long term supporter of the charity, with hosts Fuller’s CEO Simon Emeny and Sales Director Richard Fuller. 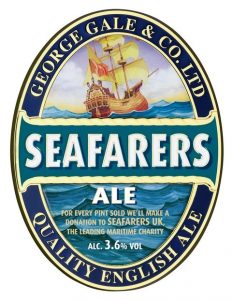 Admiral Lord West said: ‘It is a real pleasure to be able to see such a worthwhile charity receiving generous and constant support and it was great to be a part of today’s proceedings.’ Simon Emeny said: ‘To see this pub and area’s naval theme represented meaningfully is very important and we are delighted Seafarers UK could join us at the opening of The Admiralty to receive this donation.’

Seafarers UK was founded in 1917 as King George’s Fund for Sailors. Seafarers UK is a charity that provides vital funding to support seafarers in need and their families. It does this by giving money to organisations and projects that make a real difference to people’s lives, across the Merchant Navy, Fishing Fleets, Royal Navy and Royal Marines. Last year Seafarers UK gave grants totalling £2.5 million to more than 80 maritime welfare charities. Seafarers UK receives no government funding and is heavily dependent on public donations, legacies and corporate support to maintain its grant-making programme.

Fuller, Smith and Turner PLC is an independent traditional family brewer founded in 1845 and is based at the historic Griffin Brewery in Chiswick, London, where brewing has taken place continuously since 1654. The company runs 180 managed bubs and hotels and 206 tenanted pubs, with a focus on outstanding cask ale, great wine, exemplary service and delicious fresh, home-cooked food. The company also has 622 boutique bedrooms in its managed estate. Fuller’s pub estate stretches from Brighton to Birmingham and from Portishead to the Greenwich Peninsula, including 168 locations within the M25.

The Misuga Group appoints Capt. Herbert Soanes as Chief Commercial Officer for Europe and the Americas

If the shoe fits!