World Sailors of the year head to Dubai 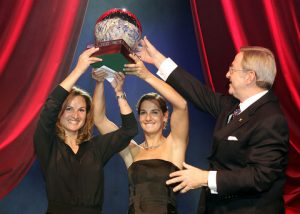 Sofia Bekatorou middle receiving the 2004 award with Emilia Tsoulfa. On the right, King Constantine who presented the award

Thursday 13 November 2014 – Five ISAF Rolex World Sailors of the Year will be gunning for gold at the inaugural ISAF Sailing World Cup Final in Abu Dhabi, United Arab Emirates from 26-30 November 2014. Since 2002, Sofia Bekatorou (GRE), Anton Paz (ESP), Mat Belcher (AUS), Blanca Manchon (ESP) and Paige Railey (USA) have all been presented with the prestigious marble and silver trophy following their incredible achievements within the sport of sailing. They continue to perform to the highest of standards and will be looking to add an ISAF Sailing World Cup Final gold medal to their impressive repertoire of accomplishments. Greece’s Bekatorou is a two time recipient of the ISAF Rolex World Sailor of the Year Award thanks to her exploits in the Women’s 470 and Yngling. Bekatorou won four consecutive Women’s 470 World Championship titles from 2000 to 2003 and took gold at the Athens 2004 Olympic Games. For her achievements she was crowned female ISAF Rolex World Sailor of the Year in 2002 and 2004. She made the move to the Yngling for Beijing 2008 where she took bronze and is now competing in the mixed Multihull, the Nacra 17, with Konstantinos Trigonis. The pair will be part of the 17-boat Nacra 17 fleet in Abu Dhabi and Bekatorou is delighted to be surrounded by the best of the best,  “It does not surprise me that the Sailing World Cup Final attracts a number of well decorated sailors. This is the meaning of such an event, to attract the elite athletes and provide a great sailing event so it’s attractive for the media and the spectators. “It is a great opportunity to experience similar parameters with the Olympic Games performance factors. I am really looking forward to it. “I expect a well organised event with lots of sailing adrenaline. I want to race against the top sailors of our fleet and meet them bow to bow over and over again. The rest of the World Cup events haven’t given me this opportunity and since we are a new team we will definitely benefit from such an experience. “I expect that the Sailing World Cup Final will become, by the years, a pinnacle event like in other sports.” 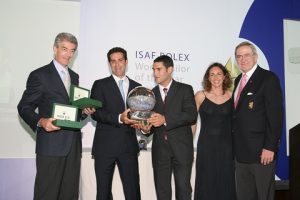 Anton Paz (middle) was awarded the trophy in 2005

2005 ISAF Rolex World Sailor of the Year recipient Anton Paz (ESP) claimed the award with Tornado helm Fernando Echavarri. After winning Tornado gold at the Beijing 2008 Olympic Games, Paz stepped away from the Olympic circuit to focus on the 2008-2009 Volvo Ocean Race. On-board Telefonica Black, skippered by Echavarri, Paz finished sixth. He has since made the move to the 49er, sailing with his brother Carlos. With many distinguished and recognisable names within the ten Olympic and Open Kiteboarding events Anton is delighted to be among them,  “The feeling is that even though it’s the first ISAF Sailing World Cup Final in Abu Dhabi, it will feature top level sailors. Not only those winning the Rolex World Sailor of the Year, but even medallists and world champions of all Olympic classes. “A high level is expected so it will be a very close competition that will be resolved by small details. It’s sure to be a great show and I have no doubt that the organisation will live up to expectations.” The Paz brothers will be part of a high calibre 49er fleet in Abu Dhabi. 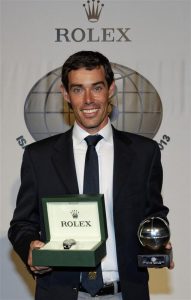 Mat Belcher (AUS) has been nominated for ISAF Rolex World Sailor of the Year on four occasions. He was nominated alongside crew Malcolm Page in 2010 and 2012, as an individual in 2013 and with crew Will Ryan in 2014. The Australian was announced winner at the 2013 awards ceremony in Muscat, Sultanate of Oman. Belcher has won it all in the Men’s 470. He has London 2012 Olympic gold to his name and is a five time 470 World Champion, winning it twice with Ryan. Belcher and Ryan will go into Abu Dhabi as red hot favourites coming off the back of 2014 World Championship glory in Santander, Spain. “To have this calibre of fleet is no surprise, ” commented Belcher on the elite level athletes in all fleets.“The sailors are after top level competition and well run events. The profile of ISAF events are high and the quality of sailors reflect this. “The numbers are slightly down [in the Men’s 470] however with the notice given I’m surprised we managed 16. We do however have six of the top seven teams from the ISAF Sailing World Championships in Santander. I’m looking forward to heading over to Abu Dhabi, it’s a new venue for us so I hope to can adapt quickly when we arrive.” Abu Dhabi will be the ISAF Sailing World Cup Final venue from 2014 through to 2017 and Belcher is optimistic heading into the future,  “We are looking forward to seeing how the event develops moving forward. With the ISAF Sailing World Cup now in its sixth year, we really hope this style of format is the new pathway to making sailing more attractive to the broader community.” Spain’s Blanca Manchon received the coveted title of ISAF Rolex World Sailor of the Year in 2010 after taking the 2010 RS:X World Championship title and dominating at many ISAF Sailing World Cup regattas. She continues to excel in the Women’s RS:X and at the ISAF Sailing World Cup Final in Abu Dhabi she will be joined by a whole host of Olympic and World Champions. London 2012 Olympic gold medallist Marina Alabau (ESP), silver medallist Tuuli Petaja (FIN) and bronze medallist Zofia Klepacka (POL) will all be gunning for the World Cup Final title. Add 2014 World Champion and 2014 ISAF Rolex World Sailor of the Year nominee Charline Picon (FRA) into the equation and it will be a fierce contest.

2006 ISAF Rolex World Sailor of the Year Paige Railey (USA) will sail in the 17 strong Laser Radial fleet at the ISAF Sailing World Cup Final. Railey, 2005 Laser Radial Champion, will be joined by Olympic medallist Evi Van Acker (BEL) and 2013 World Champion Tina Mihelic (CRO) in Abu Dhabi. With nine of the world’s top ten Laser Radial sailors, several Olympians and ISAF Sailing World Cup medallists amongst the pack it will make for one of the closest Laser Radial regattas in recent years. Across the fleets 49erFX competitor Tamara Echegoyen (ESP), Ed Wright (GBR) in the Finn, Laser Radial sailor Evi Van Acker (BEL), Offshore and Volvo Ocean Race superstar Franck Cammas (FRA), Kiteboarding pioneer Steph Bridge (GBR) and dominant Women’s RS:X racer Charline Picon (FRA) have all been nominated for ISAF Rolex World Sailor of the Year. Those who are able to walk away from Abu Dhabi with ISAF Sailing World Cup Final gold around their neck will certainly put their names into the public domain when nominations for the 2015 ISAF Rolex World Sailor of the Year Awards go live next year. View the full entry list here.  Video Tension Up, Show Us What You’re Made Of At The ISAF Sailing World Cup URL – http://youtu.be/wela_F0_NNc Embed – <iframe width=”560″ height=”315″ src=”//www.youtube.com/embed/wela_F0_NNc” frameborder=”0″ allowfullscreen></iframe> Follow ISAF Sailing World Cup website http://www.sailing.org/worldcup/home.php ISAF Sailing World Cup Facebook http://www.facebook.com/ISAFSailingWorldCup About ISAF Sailing World Cup Final Abu Dhabi All ten Olympic events will be contested in Abu Dhabi from 26-30 November, with an open kiteboarding event joining the fray around Lulu Island off the UAE capital’s stunning Corniche. With just 20 boats in each event the competition is set to be fierce.  Equipment will be supplied in eight of the ten Olympic events (RS:X sailors shall bring their own equipment) and support will be available for travel expenses and accommodation. The ten Olympic events will contest an opening series and a Medal Race with the kiteboard fleet using a short track format.  Prize money will be in awarded to the top three overall finishers in each of the Olympic events from a total prize purse of US$200, 000. The qualification system for the 2014 Final was published on 30 July 2014 and is included in Addendum A of the Notice of Race.  Click here for the Notice of Race. The first sailors to secure their place were confirmed at the ISAF Sailing World Championships in Santander where the top ten in each event were offered a place. ISAF Sailing World Cup The ISAF Sailing World Cup is a world-class annual series for Olympic sailing. It is open to the sailing events chosen for the 2016 Olympic Sailing Competition. The ISAF Sailing World Cup brings together the major regattas on the Olympic sailing circuit. Over 2, 000 of the world’s leading sailors representing 75 nations competed in the sixth season of the World Cup, 2013-2014. For more information about ISAF please go to isaf.com or contact marketing@isaf.com Contact ISAF Communications Department Tel: + 44 2380 635 111 Fax: + 44 2380 635 789 Email: marketing@isaf.com About The International Sailing Federation The International Sailing Federation (ISAF) is the world governing body for the sport of sailing. ISAF is made up of 140 Member National Authorities (MNAs), who are its principal members, and responsible for the decision making process that governs the sailing world. There are currently more than 100 ISAF Class Associations, ranging from the small dinghy classes for young people up to 60 foot ocean racers. Sailing Sailing is a lifetime sport enjoyed right across the world. The sport encompasses a massive range of disciplines and events including Olympic sailing, offshore sailing, windsurfing, match racing, team racing, fleet racing and disabled sailing.

RescueSim User Conference gathers safety professionals from around the globe