GAC issues call to action in fight against Ebola 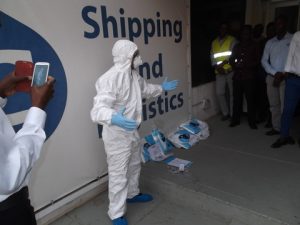 GAC staff in Angola and Nigeria have been briefed on precautions to prevent the spread of the Ebola virus.

Angola and Nigeria,  14 November, 2014 –Global shipping, logistics and marine services provider GAC Group is calling for shipping and logistics companies to invest in staff and crew education on how to reduce the risk of exposure to Ebola, and to keep up-to-date with precautionary measures being put in place around the world to contain the spread of the virus and minimise its impact on global transport.

The Ebola epidemic has affected multiple countries in West Africa, with most cases being reported in Liberia, Guinea and Sierra Leone. While some isolated cases had been reported in Nigeria, the country has now been officially declared Ebola-free, and has been praised for its handling of the potential outbreak.

However, GAC management and staff in the region are constantly vigilant to the dangers of possible contagion through transportation and trade links with countries still affected.

Michael Sturesson, General Manager of GAC Angola, says the best way for the shipping and logistics sector to reduce exposure is through internal communications and educating employees:  “Angola is Ebola-free, but we recognised that cases elsewhere in West Africa meant our staff needed to be made aware as early as possible of how best to protect themselves. That way, even if the virus did reach our country, we would be well prepared and able to continue carrying out our duties and supporting our customers.”

Since March 2014, GAC Angola’s QHSSE Manager Jose Lourenco has been conducting Ebola Training and Awareness classes with staff.  This includes advice on signs of infection, appropriate measures of protection and a demonstration of GAC Angola’s Ebola Personal Protective Equipment kit.  Additional advice from the World Health Organisation (WHO) and International SOS are also available to all staff.

Customers are also being kept informed of protective measures.  To date, port authorities in Angola have not imposed any restrictions, instead advising all parties to follow international guidance issued by bodies like the WHO, IMO and IATA. However, certain block operators have introduced pre-arrival questionnaires and, as standard practice, GAC Angola asks Masters to give a pre-alert if any crew member has a high fever or experiencing any symptoms that could be associated with Ebola.

In Nigeria, GAC is adopting a similar approach.  Updates from the Government and flyers from SOS International are distributed to staff and posted at GAC offices as well as crew and customer transit vehicles. Hand sanitizers have been installed for use by staff and visitors.

Robert Bal, GAC Nigeria’s Managing Director, says: “Regularly sharing health information is an integral part of our approach to employee welfare.  When the first Ebola case was reported in Nigeria, we increased our information updates.  This pro-active approach to health issues not only protects employees, it also helps contain the spread of Ebola.  Timely reporting, education and support help us to take care of each other and our customers – and that’s an important element of what we call the GAC Spirit.”

Port authorities in Nigeria have restricted the movement of personnel not directly involved with the crude export operations into all terminals.  Those allowed entry into the terminals are first screened for Ebola symptoms. Sanitizers are placed at all entry/exit points at the terminals and shore offices, and quarantine circulars are in place at all terminals, where it is compulsory that well-kitted quarantine officers board all export vessels for checks prior to other shore personnel, all of whom are screened ashore before boarding.  Arriving vessels are expected to submit their port call lists, which are scrutinised by the terminal’s health authorities prior to accepting the vessel.

Although the WHO has declared Nigeria officially Ebola-free, Bonny Port issued an alert message at the height of the epidemic, which is still included in GAC Nigeria’s pre-arrival messages to vessels, along with an alert message from the Nigeria Port Authority.

Shipping companies also need to remain informed of the guidance and precautionary measures being put in place, in West Africa and globally.  The IMO has published Circular Letter No.3484 on the precautions to take to protect passengers, seafarers and others from Ebola.  Likewise, the US Coast Guard (USCG) has published a reminder of its guidance and requirements concerning Ebola precautions.  Most recently, the Zhanjiang MSA Marine Department for Ebola Virus Protection has advised vessels that loaded at ports in Guinea, Sierra Leone, Liberia and Congo that they are prohibited from entering the port of Zhanjiang.

GAC’s free daily ‘Hot Port News’ service includes regular updates on measures being introduced around the world to prevent the spread of Ebola. The daily updates are viewable online at the GAC website, as well as in a dedicated LinkedIn group at https://www.linkedin.com/groups?home=&gid=7451498,  and may also be received as a daily email bulletin. To register visit: www.gac.com/hpn