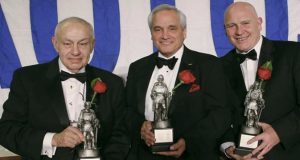 14/11/2014 – Awards were also presented to Joseph Cox, president and chief executive of the US Chamber of Shipping, and Frederick J Harris, president of shipbuilders’ General Dynamics NASSCO.

The citation for Steve Cotton noted that under his leadership, the ITF’s maritime sections had made important achievements, including the expansion of the ITF inspectorate from 35 to 124 inspectors and 26 other contacts, with a total of 9, 503 vessel inspections across 52 countries in 2013, and USD38, 429, 647 of owed wages recovered for seafarers. The number of collective agreements covering seafarers on board vessels had also increased from less than 2, 000 to more than 12, 000. Steve’s role in the International Bargaining Forum to improve seafarers’ pay and conditions was also cited, as well as his work in the creation, ratification and implementation of the Maritime Labour Convention 2006 (MLC) – the “seafarers’ bill of rights.”

Steve Cotton commented: “This award goes to everyone in the worldwide community that is the ITF. Every one of us defends the rights and safety of seafarers. That is our priority, bolstered by the international solidarity of trade unions and their members worldwide, by cooperation with all who recognise that aim, and now by the opportunities offered by the MLC 2006.”