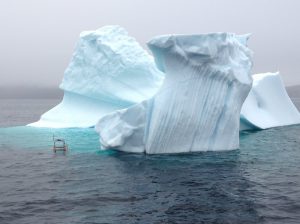 Rigs at risk from drifting icebergs can expect an early warning following research by the Memorial University of Newfoundland.

The Autonomous Ocean Systems Laboratory (AOSL) at the University is undertaking a long-term study into modelling the behaviour of icebergs that includes acquiring real-world data that will increase the accuracy of predicting the rate and direction of their drift.

They are also finding ways to identify exceptionally deep icebergs that might drag across the seabed in shallow water and damage pipelines.

Specially designed autonomous vehicles are being developed for the role. Fitted with ice profiling sonar they will stay with an iceberg for 28 days at a time gathering data on ice thickness and volume – as well as direction and drift.

To help evaluate systems planned for use on the unmanned autonomous vehicles, AOSL is using a Saab Seaeye Falcon ROV as a development platform.

Neil Riggs, senior project manager at AOSL, says the Falcon is a valuable development tool for helping understand how various payloads will behave when attached to autonomous vehicle systems.

“It was recognised at an early stage that in order to be effective in performing R&D for autonomous systems we needed an ROV tool. The acquisition of the Falcon resulted from a careful examination of the available alternatives. It was judged the Falcon suited our needs extremely well. It is a very good R&D support system for us.”

The University already deploys the Falcon for a range of tasks that include utility search and recovery and for training pilots in ROV operating.

The largest selling ROV in Saab Seaeye’s range of underwater vehicles, the Falcon’s winning formula comes from its intelligent control concept and from being small enough to be manhandled into the water, yet having five powerful thrusters that can handle strong currents with precise control.

This combination of intelligence, power and manoeuvrability means it can operate sensors, tooling and complex systems typically found on much larger ROVs.

Laboratory Director Dr. Ralf Bachmayer (right) and PhD student Brain Claus preparing the Falcon for an AUV retrieval mission – one of its roles at AOSL.

The AOSL project has an historical perspective that started with the sinking of the Titanic, which highlighted the need for detailed tracking of icebergs. They are now monitored worldwide by the US National Iceberg Center, and the University’s work will add to this resource by significantly advancing knowledge and safety concerning the predictability of their movement.

The current AOSL project will significantly increase observational capabilities of the underwater environment in harsh ice-covered and iceberg infested environments offshore eastern Canada and in the Arctic. The range of real time data gathered will be extensive as it identifies above and below water shapes of icebergs; maximum keel shape, depth and ocean surface current field; surface to bottom current profiles; and weather in the vicinity of icebergs.

The Freedom Association has a new Chairman