The Freedom Association has a new Chairman 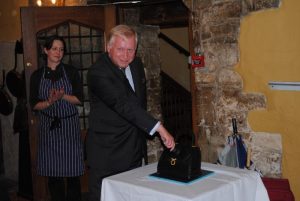 The Freedom Association (TFA) is delighted to announce that its new Chairman is Sir Mark Worthington OBE. Sir Mark was elected unanimously by TFA’s Council.

We are honoured that Sir Mark has agreed to serve as Chairman of The Freedom Association. He gave Lady Thatcher distinguished and loyal service for over twenty years. I have had the privilege of knowing him for even longer than that, and have nothing but admiration and respect for his character and his judgement. In addition to his exceptional level of experience and knowledge, Sir Mark will bring to The Freedom Association a powerful commitment to spreading its freedom message to students and young people, and to extending its reach across party political boundaries.

Sir Mark was born in 1961, in Staffordshire. He has a BA Honours degree in History from King’s College, London. From 1986 to 1992 he was a parliamentary aide to several MPs. In 1992 he was appointed as political secretary followed by private secretary to Lady Thatcher and he continued in that capacity for the next 21 years until her death. He was also Director of the Margaret Thatcher Foundation from 1992 until 2010.

With Lady Thatcher, he was involved with a number of charities and still maintains active links with those, such as the Royal Hospital Chelsea and the Falklands Veterans Assn. He is also a member of the Court of Patrons of the Thrombosis Research Institute. Sir Mark is now an independent business consultant specialising in government/public affairs/international advice. He was appointed an OBE in 2005 and KB in 2014.

If you would like to meet Sir Mark and hear him speak at his first Freedom Association event since becoming our Chairman, why not join him (and me) at the inaugural Margaret Thatcher Memorial Dinner on Monday 1st December 2014 at the Victory Services Club, in the heart of London. Most tickets have already sold, but a small number are still available.

The dinner is being organised jointly by The Freedom Association and King’s College London Conservative Society; the proceeds will go to the Margaret Thatcher Centre – an institution dedicated to educating future generations and sharing the story of Lady Thatcher’s life and legacy. It is a truly worthy cause.

The 3-course dinner will feature a main course of Scottish Sirloin of Beef with Yorkshire Pudding, Braised Oxtail, Vegetables and Guinness Gravy and the ticket price includes coffee, half a bottle of wine and the drinks reception before the dinner (NB: vegetarian alternative on request). The venue – The Victory Services Club, Seymour Street, London W2 2HF – is just a short walk from Marble Arch. Drinks will be served from 6.30 pm and dinner at 7.30 pm.

There will be a prize draw, including exclusive items signed by Lady Thatcher, with proceeds going to the Margaret Thatcher Centre. A cash bar will be provided after dinner until 11.00 pm. Dress code: black tie or lounge suit – the choice is yours.

£100 per ticket (NB: price includes drinks reception, 3-course dinner, coffee and half a bottle of wine)

I do hope that you will join me, Sir Mark Worthington and other leading admirers of Lady Thatcher at this dinner. Sir Mark and I were both students at King’s College, London when Margaret Thatcher became Prime Minister. By joining with us at this Memorial Dinner, you will not only enjoy an evening to remember, but you will be helping to spread her vital freedom message to a new generation. Margaret Thatcher transformed Great Britain. Now we all owe it to her to help inspire the next generation, just as she inspired our own.

I look forward to seeing you at the Victory Services Club on 1st December.