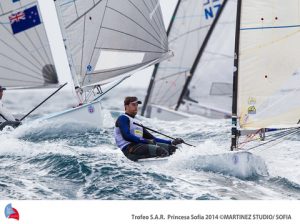 19 November 2014 – Issued on behalf of ISAF – The ISAF Sailing World Cup Final Finn fleet is made up of some exceptional talent with Great Britain’s Ed Wright and Pieter Jan Postma (NED) coming in to Abu Dhabi, UAE with good form.

Like Wright, Postma has numerous medals from large scale events. The Dutch racer claimed silver at the Finn Worlds in 2007 and 2011 with a bronze following in 2013. However, throughout the years Postma has regularly found himself playing second or third fiddle on the Finn podium, losing out by narrow margins. But at the 2014 edition of ISAF Sailing World Cup Hyeres he came out on top, breaking his duck, “I counted my ISAF Sailing World Cup medals and it was 11 before I got my first gold, ” said Postma, “so it’s giving me some extra drive to battle for a podium finish at the World Cup Final. I’m looking forward to it and I’m curious as to how it will run.”

With confidence behind him Postma will be a firm challenger for the Finn ISAF Sailing World Cup Final title and he comes in well prepared, “As a sailor I think the event is great timing as we’ve just had a training camp in Croatia. I was training with Ivan Kljakovic Gaspic (CRO) and Michele Paoletti (ITA). We’ve made our preparations and from there we’re off the Abu Dhabi.”

As the clock ticks down to the Rio 2016 Olympic Sailing Competition the sailors’ physical and mental conditioning is increasing on a daily basis. The fleet will come in fighting fit, raring to go as Postma concluded, “I think the fleet will be a strong one. As it’s coming closer and closer to the Olympics everyone wants to be and is at a high level. The Brits for example have their pre-Olympic trials in January so it’s important to have a high level of good quality sailing.

“Everybody will be quite fit and it’s an event you want to perform at and I’m quite keen to do well.”

Slovenia’s Vasilij Zbogar is a regular on the Olympic sailing scene having competed at four Olympic Games, three in the Laser and one in the Finn. The Athens 2004 bronze medallist and Beijing 2008 silver medallist has been preparing for Abu Dhabi at the Dinghy Academy in Valencia, Spain and cannot wait to commence racing, “It’s extremely exciting to have only the best on one starting line, ” gleamed Zbogar, “I think most of the sailors were looking forward for this moment. It is a big step forward and it is good for the sailors but even better for the media. I think all of the fleet have the same goal, be top three and win.”

The Abu Dhabi backdrop will be a new one for not only the Finn fleet but all of the fleets with many of the competitors heading to the Emirati capital for the first time. Former World #1 and current World #5 Finn racer Caleb Paine (USA) has high expectations for the event in one of the fastest developing cities in the world, “I am hoping for it to be glamorous, ” explained Paine, “I think it’s an awesome match and the potential is huge. It’s a glamorous sport in a glamour city, what more can one ask for?

“I am excited to go on many levels; I have heard the same from my teammates that will be participating in the Final. Great competition makes victory just that much sweeter so whoever wins will have earned their money and my goal is to win, of course.”

Finn racing is scheduled to commence at 12:00 local time on Thursday 27 November.