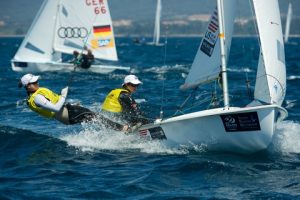 20 November 2014 – Issued on behalf of ISAF – The ISAF Sailing World Cup Final in Abu Dhabi, United Arab Emirates is set to be ‘an experience of a lifetime’ according to American Women’s 470 sailor Briana Provancha.

Some of the world’s top Men’s and Women’s 470 teams will make up the individual fleets with some excellent racing on the cards. Across four days of competition the 470 sailors will fight it out bow to bow across six fleet races and a final day Medal Race with ISAF Sailing World Cup Final gold and a share of the prize purse of $200, 000 up for grabs.

“For the racing, we are going to bring our best. This will be an experience of a lifetime, and we’re planning to enjoy ourselves and have fun, maybe even ride a camel, ” commented Provancha.

Provancha with helm Anne Haeger have been one of the most consistent Women’s 470 teams throughout 2014 with consistent top five finishes. The pair will be ones to watch in Abu Dhabi and have been working hard to prepare for the event, “We recently returned to the USA after doing some training in Rio, ” said Haeger, “As of lately we have been taking some time off preparing for the event.

“Before we head over to new venues we will usually research the common weather patterns and see if we know any locals who are willing to pass along some information. It is also nice to get to know the area you’re going to be travelling to, researching past history and tourist stops.

“Personally I am excited to travel to Abu Dhabi and see the city. The Sailing World Cup Final is great in concept, especially if the locals get into the event. Our goal is to work on some upwind technique and enjoy the beautiful country.”

The Americans will face stiff competition in the fleet from 2014 World and European Champions Lara Vadlau and Jolanta Ogar (AUT).

Vadlau and Ogar went into 2014 with one aim, to qualify for the Rio 2016 Olympic Sailing Competition. As a result they have emerged as serious contenders taking top honours at two of three high profile regattas. With the third, the ISAF Sailing World Cup Final to go, they’ll be aiming for a clean sweep, “Our main goal of the season was to get the ticket for Rio and everything that’s come next is just another present for our great season, ” said Vadlau.

“We want to win a medal and if all is going well, of course we want to win the event. For us this event is really exciting. It’s a great idea especially as there will be, for the first time, some prize money to win and it finally feels like we are a real professional. We are really looking forward to Abu Dhabi as it is a really cool city.”

Sixteen strong Men’s 470 teams will go head to head for the right to be crowned the 2014 ISAF Sailing World Cup Final Champion.

Mat Belcher and Will Ryan (AUS) head into Abu Dhabi with an excellent record. The pair were crowned World and European Champions for the second consecutive year together in 2014. For Belcher his world’s victory was his fifth in a row. With a strong fleet in Abu Dhabi the Australians are looking forward to getting stuck in, “To have this calibre of fleet is no surprise, ” commented Belcher on the elite level athletes in all fleets. “The sailors are after top level competition and well run events. The profile of ISAF events are high and the quality of sailors reflect this.

“We do have six of the top seven teams from the ISAF Sailing World Championships in Santander. I’m looking forward to heading over to Abu Dhabi, it’s a new venue for us so I hope we can adapt quickly when we arrive.”

The Australians will have their work cut out in Abu Dhabi with high flying youngsters Jordi Xammar and Joan Herp (ESP) heading in on a high. The pair, who won ISAF Youth Worlds gold together at Istanbul 2009, took their first major senior title together at ISAF Sailing World Cup Qingdao in October.

Under serious pressure from experienced and seasoned competitors the Spaniards held their nerve on the final day to seal the deal and come in up for the challenge, “Qingdao was a perfect championship for us and it won’t be easy to repeat. I think the podium is going to be very difficult seeing the entry list of this race. Our goal is to give our best in every race and learn as much as we can from every sailor that will be sailing there.”

The Spaniards have dominated the Junior 470 scene and hold world titles from 2013 and 2014. With such a high calibre of racing in the Men’s 470 fleet they were delighted to qualify, “We are very excited for this Final. The first time we heard about it we were not sure if we would be able to qualify but with the Medal Race of Santander [2014 ISAF Worlds] we had secured our place there and we are very excited to be in the startling line with the best boats of the world.

“We have done some training in Santander with our coach and after that we have been training with our sail maker and some of the top teams in Sanremo [Italy]. We are looking at some wind statistics to try and get ready for it.”

World #3 pair Sime Fantela and Igor Marenic (CRO) were the last pair to take the Men’s 470 World Championship title before Belcher asserted his dominance. They took victory in 2009 and have been mainstays atop of the 470 pack ever since. They won gold at the 2014 ISAF Sailing World Cup Mallorca and will be gunning for the top spots in Abu Dhabi.