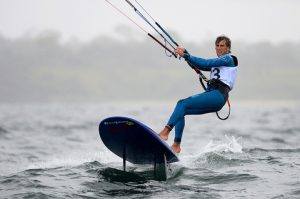 The German is a regular at IKA World and Continental Championships with plenty of accolades falling his way. The ISAF Sailing World Cup Final in Abu Dhabi, United Arab Emirates will bring in the best racers on the planet and Gruber is looking forward to locking horns with 16 world class males and four of the fastest females in the open fleet.

“I have never seen a big sailing event like this, ” commented the German,  “so it will be exciting to see all the good athletes on the water. The concept is great, for me it seems like the Champions League Final in soccer.

“As a sportsman it is always great to race against the best in the world and we all want to bring the sport to the next level. It will be the strongest fleet this year.”

Gruber has become accustomed to featuring at the top of the fleet and took gold at the 2013 IKA Worlds. Most recently he walked away with bronze from the 2014 Formula Kite Asian Championship and comes in ready for the challenge,  “Last week I was at the Asian Championship in Doha [Qatar] and had a great competition. There, I saw a lot of top riders and it was perfect training for the World Cup Final in Abu Dhabi.

“I have never been to Abu Dhabi before but I am really looking forward to the event. I’ve been informed from other riders and sailors what the conditions are like on the water, that’s the most important thing for me.

“A top five result is my goal and I am also looking for the podium. I will give my best to reach it.”

Oliver Bridge (GBR) claimed the overall title at the Asian Championship and will be bringing excellent form into Abu Dhabi having also defended his European title earlier on in the year. He will be racing against his mother and 2014 ISAF Rolex World Sailor of the Year nominee Steph Bridge (GBR).

Steph was a force to be reckoned with at the 2014 Formula Kite Worlds and picked up her fourth world title. She missed out on women’s gold at the Asian Championship by nature of countback to Russia’s Elena Kalinina and is fully prepared for racing, “We had very light winds [at the Asian Championship] which was ideal training for next week in Abu Dhabi. Olly won the men’s title and I was second, equal on points with first. The last couple of weeks we have stepped up the fartlek training work and tried to get on the water each day.

“Last week was our first time in the gulf. I have spoken to Ian Walker who lives out there and he says it is always light winds. We have studied the tidal streams and local weather pattern which seems in transition this time of year. Late sea breezes and an early sunset will mean a short wind opportunity to get racing in.”

The Open Kiteboard competition will be contested in three stages across the four racing days. Stage 1 will see six fleet races sailed on Thursday 27 November to decide the seeds for Stage 2. The 20 competitors will be divided up for Stage 2 heats on Friday and Saturday based on their seeding from Stage 1. The top ten boats will then progress to the medal stage.

Two semi-finals will be held with five racers in each. Places 1 and 2 will carry forward ten points, 3 and 4 seven points, 5 and 6 five points, 7 and 8 four points and 9 and 10 three points. Two races in each semi-final will follow with the top two placed sailors in each heading to the final. 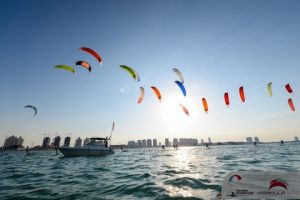 From there, it’s a four way single race shoot out for the podium spots.

On the format Bridge added,  “I think that sailors do not like change but with kitesurfing we have such a three dimensional sport that change is part of our ever evolving sport. I came from sailing where we would do a two hour race and get one result whereas now we are banging out 15 minute races and it’s short, sharp and high impact with plenty of races each day.

“In the Sailing World Cup Final this will be even quicker and require slightly different tactics. It’s going to be exciting to see how we all place. We have an open fleet of 16 men and four women and it will be great to push the level and for sure, the testosterone levels will be high.”

Spain’s Florian Trittel is no newcomer to ISAF titled events. The Spaniard is a two time ISAF Youth Sailing World Champion winning gold in the 29er with Carlos Robles at the 2011 and 2012 editions in Zadar, Croatia and Dun Laoghaire, Ireland.

Having made the switch to kiting he regularly features at the front of the fleet and has used 2014 wisely to prepare for the ISAF Sailing World Cup Final,  “Since I knew about the fact that kiteboarding will join the Olympic classes in Abu Dhabi I set it on my planning as one of the most important events this season.

“There, all my training and championships have been a preparation for the big final, ” he exclaimed. “However the course we will be competing in is not a windward leeward as usual, we will race in a short track. Like this, it is more attractive to the audience as the action is even higher.

“It will be a very challenging regatta and that’s why I trained short track racing back at home.”

Like all of the sailors heading to Abu Dhabi, Trittel is excited for the event and concluded by saying, “Generally speaking about the Sailing World Cup Final, I think it is something very special and attractive for everybody – sailors, spectators, media… Me personally, I am very excited and really looking forward to the event and I am sure that everybody else wants the event to start as well.

“In the kite fleet, all of the best sailors from around the world will be present so it will be a very close, tough and interesting regatta.”

Sailing Energy will be providing rights free for editorial use high resolution images during the 2014 ISAF Sailing World Cup Final.

Images will be available to download via the ISAF Sailing World Cup Final image server from 26 November 2014.

All ten Olympic events will be contested in Abu Dhabi from 26-30 November, with an open kiteboarding event joining the fray around Lulu Island off the UAE capital’s stunning Corniche.

With just 20 boats in each event the competition is set to be fierce.  Equipment will be supplied in eight of the ten Olympic events (RS:X sailors shall bring their own equipment) and support will be available for travel expenses and accommodation.

The Abu Dhabi Sailing and Yacht Club will host the ISAF Sailing World Cup Final with some technical facilities located at the adjacent Abu Dhabi International Marine Sports Club. The venue is located on the main island of the city with immediate access to the beautiful waters of the Arabian Gulf.

The ten Olympic events will contest an opening series and a Medal Race with the kiteboard fleet using a short track format.  Prize money will be in awarded to the top three overall finishers in each of the Olympic events from a total prize purse of US$200, 000.

The qualification system for the 2014 Final was published on 30 July 2014 and is included in Addendum A of the Notice of Race.  Click here for the Notice of Race. The first sailors to secure their place were confirmed at the ISAF Sailing World Championships in Santander where the top ten in each event were offered a place.