FUGRO awarded one of offshore wind… 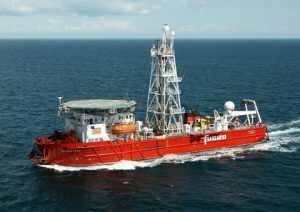 Fugro has been awarded a contract for one of the largest seabed investigation campaigns in the history of the offshore wind industry by DONG Energy.

Worth £13 million, the contract covers geotechnical investigation work in preparation for Hornsea Project One, scheduled to go into operation by 2020 when it will become the world’s first gigawatt scale, far from shore, wind farm. The park is located 120 kilometres off the Yorkshire coast and, when completed, will be able to meet the electricity needs of around 800, 000 UK homes.

Hornsea Project One is a joint venture between SMartWind – a consortium of Mainstream Renewable Power and Siemens Project Ventures – and DONG Energy. Currently awaiting a development consent decision, Hornsea Project One is one of three projects for which DONG Energy was awarded Financial Investment Decision Enabling Contracts for Difference by the Government in April this year.

Benj Sykes, DONG Energy Vice President Wind Power UK and Co-Chair of the UK’s Offshore Wind Industry Council, said, “We are delighted to award this important contract to Fugro who have been selected following an extremely competitive tender process.

He added, “DONG Energy is committed to increasing the UK supply chain content in future offshore wind farm projects and this contract represents an important step in the right direction. It will also help us make significant progress on the journey to reduce the cost of electricity produced by offshore wind farms.”

Daniel Deen, Senior Project Manager at Fugro GeoConsulting said, “We are very pleased to bring our skilled team and specialist resources to this significant renewable energy project. Our geotechnical vessels will undertake seabed cone penetration testing and borehole drilling as part of the detailed site investigation. Subsequent soil testing at our laboratory facilities will also support development of the project infrastructure at this site.”

Fugro plans to use two of the largest and best equipped geotechnical vessels available on the market – MV Greatship Manisha and MV Bucentaur – to undertake the investigation work which will begin this month.

ABOUT FUGRO
Fugro creates value by acquiring and interpreting Earth and engineering data and by supporting its clients with the design, construction, installation, repair and maintenance of their infrastructure. Fugro works predominantly in energy and infrastructure markets offshore and onshore, employing approximately 12, 500 employees in over sixty countries. In 2013 Fugro’s revenues amounted to € 2.4 billion; it is listed on NYSE Euronext Amsterdam and is included in the AEX-Index.

ABOUT DONG ENERGY
DONG Energy is one of the leading energy groups in Northern Europe. Our business is based on procuring, producing, distributing and trading in energy and related products in Northern Europe. DONG Energy has around 6, 500 employees – including nearly 600 in the UK – and is headquartered in Denmark. The Group generated DKK 73 billion (EUR 9.8billion) in revenue in 2013. For further information, see www.dongenergy.com.

ABOUT SMARTWIND
SMart Wind is the supply chain led consortium developing the 4GW Hornsea Zone as part of The Crown Estate’s Round 3 offshore wind programme. Leading the consortium are Mainstream Renewable Power and Siemens Project Ventures GmbH who formed the 50/50 joint venture in 2009. SMart Wind combines the development expertise of Mainstream Renewable Power with the financial strength of Siemens Project Ventures GmbH, which brings with it the respective expertise of Siemens Wind Power as well as Siemens Transmission & Distribution Limited.

ABOUT HORNSEA ONE
Hornsea Project One is the first development proposed within the Hornsea Zone of the North Sea. Project One will constitute up to three offshore wind farms capable of generating a total capacity of up to 1, 200 MW and will include all offshore and onshore infrastructure. DONG Energy and the SmartWind consortium partners, Mainstream Renewable Power and Siemens, each have a one-third share in the project.