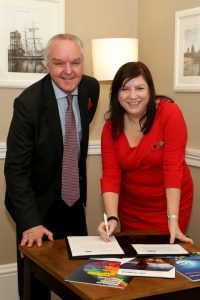 Businesses from across West Yorkshire gathered at Associated British Ports’ (ABP) Port of Goole to celebrate the signing of a pioneering Memorandum of Understanding (MoU) between ABP and Wakefield Council.

The two organisations, with support from UK Trade & Industry (UKTI), will work together to highlight and develop export opportunities for businesses across Wakefield and the Leeds City Region in order to promote business growth in the area.

Wakefield Council’s Chief Executive Joanne Roney said: “This partnership will strengthen our ability to develop export opportunities for our local and regional businesses and reinforces Wakefield Council’s commitment to securing economic growth in our region.

“Our aim is to see the value of exports coming out of our area increase by 15% over the next two years and by working with ABP and UKTI we are confident this can be achieved.”

ABP Director, Humber, John Fitzgerald is excited by the prospect of working closely with Wakefield Council.

He said: “Ninety-five per cent of trade coming in and out of the UK comes by sea and the ports are a fundamental link in the supply chain for international trade.

“The Humber ports are the region’s biggest natural asset and the largest port complex in the UK. It makes absolute sense that businesses from across Yorkshire and Humber and the whole of the north should be using them to develop and grow, and we can help them do just that.

“The ports are an enabler, allowing the regions to be internationally competitive. Take the Port of Goole for example. Here we have a tri-modal facility with excellent rail, road and waterway connections that’s a crucial trading hub.

“Increasingly the north is being marketed as a single business entity. The Humber ports are the front door of this ‘Northern Powerhouse’.”

ABP is seeking to expand on this partnership with business-minded local authorities throughout the north.

As well as hearing from John Fitzgerald and Joanne Roney, delegates attended a workshop delivered by Colin Russell of UKTI, which was designed to help them understand exporting, how to identify opportunities and how companies can achieve positive results. UKTI also provided advice on next steps for those companies which felt they needed guidance on how to start the process. Delegates were also given a tour of the port estate in Goole.

US orders trawler with common-rail technology