Wednesday 26 November 2014 – The ISAF Sailing World Cup Final in Abu Dhabi, United Arab Emirates is an exciting new adventure for the Olympic sailors with new challenges and a new culture to engage with.

“There are so many welcoming and friendly people here, ” explained Provancha at the opening press conference. “It’s such an awesome part of the world to say you were able to visit. To see things and immerse ourselves in this culture has just been a fantastic experience.

“We are definitely getting the full experience and it’s been an incredible trip so far.”

Provancha competes with Anne Haeger in the Women’s 470 and will face some tough challenges with Vadlau, 2014 World and European Champion, within the fleet and she’s keen to put on a good display, “To be part of this first concept of the ISAF World Cup Final is something incredible and I’m sure the winner of this event will go down in history and hopefully we’ll be able to perform here.

“We’re definitely looking to sail our best, hopefully make the podium and to come home with some prize money would be great. The fleet is very tough. Lara and Jola [Ogar] are fantastic competitors and we’re looking to sail hard.”

On the competition ahead Vadlau added,  “We’ve had a great season, becoming World and European Champions and we are really looking forward to this event. It’s a really cool event because it’s the first world cup final and we really appreciate being here. Of course we want to get a medal and we will do our best to win this regatta.”

The competitors across the ten Olympic events will fight it out for a share of the USD $200, 000 prize purse. The top three competitors will be awarded with ISAF Sailing World Cup honours and a percentage of the purse and 2013 ISAF Sailing World Cup Melbourne winner Bjorn Allansson (SWE) has his eyes on both,  “The whole target of being here is to be able to fly home with the glory and the prize money that comes with winning this event.

“With that said, our fleet is full of chance and I would say that all the fleet comes in with the same hopes, the same dreams and the same target. I think we are going to have really good racing that’s really tight.”

Anton Paz takes a local sailor out on his 49er

As well as the prizes on offer the opportunity to compete against some of the world’s finest sailors across a short, intense schedule is an attractive one. That rings well with Greece’s Sofia Bekatorou, Athens 2004 Olympic gold medallist, who is delighted to put herself up against the crème of the crop once again,  “Our main goal for this regatta is to compete amongst the best sailors that will be here during the World Cup Final. It’s a big chance for us as we haven’t qualified for Olympics in Brazil yet. It’s a great opportunity to fight everyday with the best of the best and try to see how we perform.”

Like Bekatorou, Paz is an Olympic gold medallist, winning gold with Fernando Echavarri in the Tornado at the Beijing 2008 Olympic Sailing Competition. After competing in the 2008-2009 Volvo Ocean Race he made the switch to the 49er and is competing with his brother Carlos in Abu Dhabi.  “Right now in the 49er my brother and I are starting to grow as a team, ” explained Paz. “We finished tenth at the Santander Worlds and we’ve come here to try and fight for the Medal Race and then the top three overall. We’ve prepared our boat and we’re ready to go sailing.” 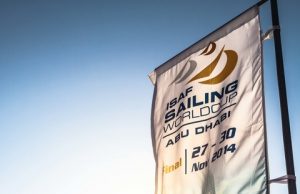 Paz was part of a scheme in Abu Dhabi whereby several of the local sailors got the opportunity to take to the water with many Olympic medallists. The likes of Beijing 2008 bronze medallist Bryony Shaw (GBR), London 2012 silver medallists Nick Dempsey (GBR) and Pavlos Kontides (CYP) and Olympians Pieter Jan Postma (NED) and Tonci Stipanovic (CRO) all welcomed youngsters onto their competition boats.

Away from the competition side of the ISAF Sailing World Cup Final, some of the sailors will be paying a cultural visit to Sheikh Zayed Grand Mosque. The local community will also embrace the event with Abu Dhabi Sailing & Yacht Club opening its doors to showcase the sport.

All ten Olympic events will be contested in Abu Dhabi from 26-30 November, with an open kiteboarding event joining the fray around Lulu Island off the UAE capital’s stunning Corniche.

With just 20 boats in each event the competition is set to be fierce.  Equipment will be supplied in eight of the ten Olympic events (RS:X sailors shall bring their own equipment) and support will be available for travel expenses and accommodation.

The Abu Dhabi Sailing and Yacht Club will host the ISAF Sailing World Cup Final with some technical facilities located at the adjacent Abu Dhabi International Marine Sports Club. The venue is located on the main island of the city with immediate access to the beautiful waters of the Arabian Gulf.

The ten Olympic events will contest an opening series and a Medal Race with the kiteboard fleet using a short track format.  Prize money will be in awarded to the top three overall finishers in each of the Olympic events from a total prize purse of US$200, 000.

The qualification system for the 2014 Final was published on 30 July 2014 and is included in Addendum A of the Notice of Race.  Click here for the Notice of Race. The first sailors to secure their place were confirmed at the ISAF Sailing World Championships in Santander where the top ten in each event were offered a place.