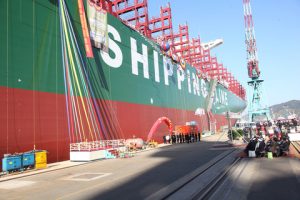 The “CSCL Globe” is the world’s largest containership and will be deployed on the Asia-Europe trade loop.

Ulsan, 28th November – CSCL Globe, the world’s largest containership and the first of a series of five 19, 100 TEU containerships ordered by China Shipping Container Lines (CSCL) in 2013, has been named at Hyundai Heavy Industries (HHI) in Ulsan, South Korea. All of the vessels in the series will be constructed to DNV GL class.

“At DNV GL, we are very honoured to be part of this project. CSCL Globe represents not only the largest, but one of the most energy efficient containers vessels in the world. I would like to congratulate both CSCL and Hyundai Heavy Industries on achieving this breakthrough in ultra-large containership development, ” says Tommy Bjørnsen, DNV GL’s Regional Manager for Korea and Japan.

CSCL Globe measures 400 m in length, 58.6 m in width and 30.5 m in depth and is as large as four soccer fields. She will be deployed on the Asia-Europe trade loop after being handed over to the owner this month.

The CSCL Globe features a 77, 200 bhp electronically controlled main engine that enhances fuel efficiency by automatically controlling fuel consumption to reflect the vessel’s current speed and the sea conditions. As a result, the containership will burn 20 per cent less fuel per TEU in comparison to a reference 10, 000 TEU containership.

The vessel and its upcoming sister ships have also implemented the RSCS class notation (Route Specific Container Stowage). The RSCS notation was developed by DNV GL to provide an even more efficient usage of cargo capacity with more flexibility and more laden containers on board on specific routes without compromising on safety.

Reflecting the environmental performance of the CSCL Globe and her sister ships, the vessels will all hold the class notation EP-D (Environmental Passport Design), demonstrating their preparedness and compliance with environmental regulations. EP-D documents compliance with all relevant MARPOL regulations and other environment-related IMO conventions. The notation also shows that the vessel meets upcoming requirements, such as ballast water management, ship recycling, bilge water separation and recovery of refrigerants.