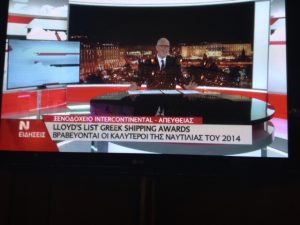 What an event it was earlier on tonight at Athens’ Athenaeum Intercontinental Hotel! A brigade from the Greek shipping industry’s diverse field was present to honour the personalities and companies for this year’s awards despite another annus horribilis due to the state of the shipping markets and delicate geopolitics affecting same! Whatever happens in the markets and maritime trade the Greeks find a way to be successful, innovative and second to none on planet ocean! This event and many others prove how two maritime nations, the United Kingdom and Greece, enhance their shipping cooperation in all fronts across the seven oceans; Regina J. Faraclas from AllAboutshipping.co.uk was there:

From the ABS sponsored cocktail reception

These awards of recognition for the key shipping personalities each year and in particular for 2014, are the result of a long and unique process, so we were proud and honoured to participate and to give you here a glimpse of what happened pending a fuller account from the organisers. This year was the 10th anniversary of what is said to be the biggest awards gathering in shipping.

After a busy reception with fine canapes and drinks, where networking was at its highest level, the one thousand strong congregation was ushered to the hotel ballroom, one of the biggest in Greece,  where Nigel Lowry successfully did the rituals and the awards were given to the winners by the sponsoring companies.

Pleased to have video a rare moment for the success of shipbroking with Dr. Anil Sharma of GMS announcing the winners: Allied Shipbroking Inc, our favourite too…, with Kostis Tsalpatouros receiving the award! 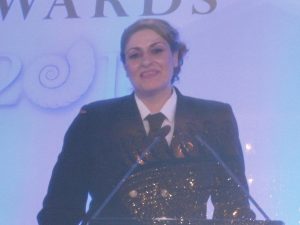 Interestingly, and as we fully support WISTA, Captain Iakinthi Tzanakaki was the Woman Personality o the Year!

Martec won the Piraeus International Centre Award, with the Hellenic Coast Guard the honoured for its Achievement in Safety – a well deserved accolade!

Our London friend Lambros Varnavides was voted Personality of the Year; Captain Nicholas Douskos got the Seafarer of the Year award, whilst the Hellenic Shipbrokers Association deservedly won the Achievement in Education and Training. 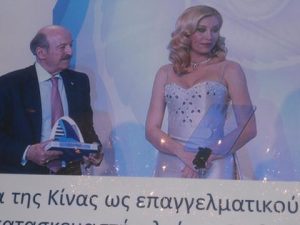 Nicky Papadakis on the left holding his award with Andriana Paraskevopoulou

Another friend, Vangelis M. Marinakis won the Greek Newsmaker of the Year award with XRTC’s George Xyradakis sporting a green tie…giving the award!

Petros Pappas with his substantial acquisitions of ships and shipping companies received the Greek Shipping Personality of the Year award!

Lastly many congratulations to the organisers and in particular Nigel Lowry and Shelagh Ingledow for successfully tackling this major challenge!

Dry Markets bottom out once again… The wets follow suit too…