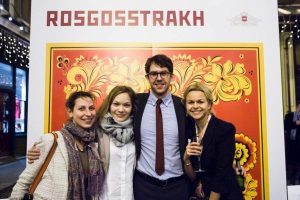 In its 700-year history, Leadenhall Market, in the heart of the City, had never seen anything like it.  Gypsy musicians and dancers swirled among the crowd, with the infectious lilt of accordion, violin and balalaika echoing along the cobblestones and bouncing off the 19th century high-domed ceiling above the halls decked out for Christmas 2014.

The evening of fiery Romany folklore and virtuosity, a new sensation in the bustling alleys that in daytime are packed with insurance market folk on their way to client meetings, was courtesy of the leading Russian insurer Rosgosstrakh.

Rosgosstrakh, known for short as RGS, invited some 100 guests from London and European marine insurance markets – underwriters, brokers, surveyors, and claims people among them – to enjoy convivial hours on a seasonally mild November night inside and on the forecourt of Chamberlain’s Restaurant, a venue that is one of the best known features of the Grade II* listed market.  The hosts billed this as a cosy anti-winter party, and the weather deferred to the theme, so much so that many of those attending dispensed with overcoats. The formal title of the sixth annual Rosgosstrakh pre-Christmas London evening was La Saison Rosgosstrakh. 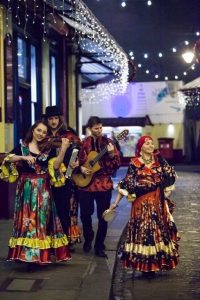 The theme was an echo of the London festival Les Saisons Russes du XX1 siècle, which earlier in the year honoured Russian artists including the ballet impresario Sergei Diaghilev. The Moscow-based marine insurance division of Rosgosstrakh chose to celebrate the glorious folklore side of Russian culture by engaging for the evening musicians and dancers specialising in national and gypsy rhythm and melody.

The event had an alternative fun title of Vodka and Caviar Tasting Refill Party, as a follow-up to the 2013 get-together when Russian water bottles were dispensed as souvenirs.

Formal but friendly welcomes to the guests were delivered by Nikolay Kolesnikov, vice-president of Rosgosstrakh; Konstantin Rogach, director of the marine division; and Olga Lazovskaya, director of the Protection & Indemnity department.

For much of the evening, accordionist Nikolai Ryskov entertained as a soloist, his joyous playing warming his fingers against the slight chill; and soprano Olga Adamovich added the stellar quality with which she has thrilled opera audiences at St Petersburg and in Italy.

Then it was on with the gypsy parade, in an extravaganza created by Gundula Gruen, founder of the London-based group of performers known as Magic Violin. Gundula has immersed herself in gypsy lore and tradition, and garbs herself and her colleagues in gorgeously colourful traditional-style dresses. Gundula is particularly attracted to Russian gypsy music and dance, because she says that it has been developed into an art form, with many Russian gypsy musicians having conservatoire education.

Soul of a different variety was soon reverberating from the balcony above the main Chamberlain’s bar, as the blues outfit Reuben Richards & Soul Train consolidated the fan base they won at the Rosgosstrakh 2013 party. 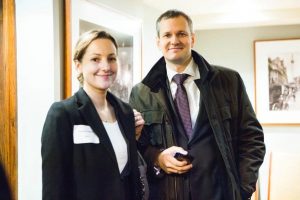 The Russian flavour persisted as waiters in floral patterned aprons (matching the design of a temporary Rosgosstrakh ‘wall’ keeping the party as private as practical) with the insurer’s logo served drinks and snacks, while inside the bar dips and superb caviar perched on an ice-block were available. There were souvenir patterned aprons, and spoons in wood finely decorated with the distinctive Russian khokhloma design to take home. 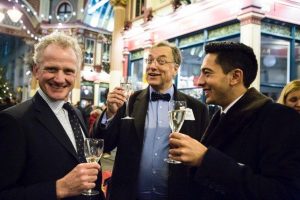 Piers O`Hegarty of Tysers; and Quentin Bargate and Adam Ramlugon of Bargate Murray.

Rosgosstrakh has gained increasing attention and a noteworthy following in the London market, among other reasons because it offers P&I limits of $500m, in line with some of the best terms in the international market. The P&I facility, which it initiated in 2008, is supported 100% in the Lloyd’s market and is ranged alongside the hull and machinery coverages essential for all operators of ships. Earlier in 2014, the number of vessels covered by the company for P&I rose to more than 1, 400.

After the memorable evening, the RGS marine team sent a message to all who attended, saying: “We are sure that we shall have the privilege of continuing excellent business relationships with you and with all our friends in the London market, and are looking forward to welcoming each and every one of you to our seventh London event at the same time next year!” 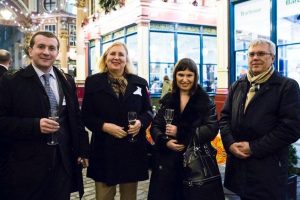 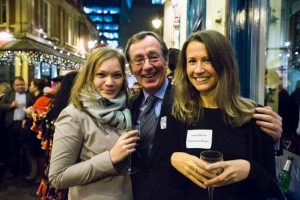