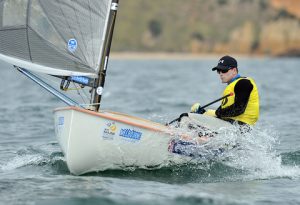 10 December 2014 – Issued on behalf of ISAF – First session competitors at ISAF Sailing World Cup Melbourne spent much of day three tweaking boats, on their phones and chatting around the boat park at Sandringham Yacht Club. The late session arrived to rig up when the bulk of the early session still had the park brake on, drifting around on Port Phillip until their class AP flag eventually came down.

By late afternoon racing really got funky in the 14 knot south sou’easter and the mood and momentum on the water shifted correspondingly. Two crews took unplanned early marks; Australian 49erFX crew of Olivia Price and Eliza Solly capsized then turtled their boat and ended up with a broken mast top section, and Austrian 49er crew of Nico Delle-Karth and Nikolaus Resch broke a tiller extension and retired from race 9.

On the Skud 18 course, qualifying series pointscore leaders after day three, Australians Dan Fitzgibbon and Liesl Tesch, were “jelly-fished”, the made-up phrase that has the internationals scratching their heads.

A light gradient 4-6 knot breeze under low cloud cover teased race officials until almost 15:00. Local counsel says the land couldn’t heat up under the cloud to suck the shore breeze in from the south west, and the mist down the bay also kept the breeze from pushing in.

There was just enough puff for Olympic class PRO Ross Wilson to send the 2.4mR and Skuds off first, followed by the men’s and women’s RS:X, then direct his teams to set up more courses for the Lasers and Finns. By the time the second block kicked off, SSE winds at 11 knots led into a great twilight session and evening finish.

Not a whole lot separates the British Sailing Team’s Finn supremo Ed Wright in first from the second and third placed Australians Oli Tweddell and Jake Lilley (Australian Sailing Squad – ASS). A 1-1.5hr gym session straight after two world cup races is how Wright and Tweddell, already with quads and thighs the width of power poles, finished off their day.

“I was pretty relaxed out there waiting for the wind to come in, I knew it would eventually, ” said Wright. “It was a tricky day with lots of shifts. I caught up my losses with my downwind speed. Hopefully tomorrow will be stronger; it’s more fun when it’s physical.”

Wright and Tweddell are bunking together during this World Cup event and chit chat about the racing inevitably pops up, but essentially they try to talk about other things. On his results today of third and first and the updated pointscore Tweddell says, “It’s nice to move up into second place overall.

“In the first race today I was yellow flagged for pumping and dropped to fourth with my penalty, but then managed to come back to finish third in that race, which I was really happy with. In the second race I led from start to finish. There were some big shifts out there; you had to be on your toes.”

Last year’s Finn gold medallist Bjorn Allansson (SWE) who famously back flipped into the water following his victory said, “We are four guys battling it out and so far Ed has been the top cat among us. Hopefully tomorrow I can come back in bigger winds and put a little more hustle behind the muscle.”

Despite an early exit the Austrians are holding onto third place in this qualifying series, which leads into the weekend Medal Race showdown off the SYC viewing deck.

49er competitor and Yachting Victoria president Ian Cunningham is always good for a quotable quote and during the postponement he delivered this pearler, “It’s going to be one of those days, crews are ready to go…there are only so many itches to scratch.”

Olivia Price (AUS/AST) and Eliza Solly (AUS/ASS) needed a good outing to put them back in touch with the first placed Tess Lloyd (AUS/ASS) and Caitlin Elks (ASS) and the Norwegians Helene Naess and Marie Ronningen in second.

In the first run of the second race they caught a wave and without the right preparation pitch-poled their 49erFX and finished upside down in shallow water. When the boat righted they found the mast above the top spreader broken. The pair raced ashore to step their replacement mast and will be back out for tomorrow’s early session. “Today was not a good day, it’s going to be tough to come back from this, ” said a disappointed Price, the match racing silver medallist from the London Games.

The courses were short and decisions fast once the breeze filled in enough to get the eight boats off the line.

Brothers Alexander Conway and Patrick Conway (AUS/ASS) held onto their overall pointscore lead, but not before a final mark rounding incident in the second race with Antonio Rosa and Joao Rosa (POR) distracted them from their dominant fleet position and forced them into the protest room.

The leaderboard is tight and the top-end of the fleet is anxiously waiting on the outcome of this evening’s protest hearing.

Angus Galloway and Joshua Dawson (AUS) were the stars of the day taking out first place in both races. This result moves them up to second overall.

The women had a long, frustrating wait out on their course as the breeze swung and softened, before finally showing enough consistency to get two races off in the late afternoon.

With the top place changing hands in each of the four races so far, Drozdovskaya stayed one point ahead of Alison Young (GBR) who had a mixed day, finishing fourth and then a frustrating 11th. 2012 Olympian Nazli Cagla Donertas (TUR) has moved up into third overall.

Australia’s Tom Burton (AST) and Matt Wearne (ASS) hold court at the top of the Laser scores, just one point the difference between first and second. New Zealand’s Sam Meech is now in good company, third overall after picking up a third and a second in today’s two races.

After quietly working their way up the ladder over the last two days, Euan McNicol and Lucinda Whitty (AUS/ASS) found their groove to win their first race of the series. “We have been chipping away in the last few days, ” McNicol said. “We have been training together quite a lot lately with the other guys in the team. For us, this event is a great opportunity to do a regatta with them.

“It’s been a constant evolution of boat speed and skills. Every day hopefully you learn a little bit. We managed to get one right this afternoon. If we keep this trend going, we are all good, ” McNicol added.

Overall, Waterhouse and Darmanin hold onto first place. In second place is Bundock and Curtis while third overall is McNicol and Whitty.

“We got jelly-fished out there on the water. We’ve never been jelly-fished before, ” declared Dan Fitzgibbon’s crew and AST teammate Liesl Tesch (AUS) after racing today. The class rules state that the sailors can’t leave their seat, so a bit of innovation was required.

“We were tracking down wind, we were hooting in front of the whole the fleet and boom!” explained Tesch. “We’ve never had a jellyfish on the keel before. You would think that surely the jellyfish would get off. I tried rocking the boat. We didn’t drop the spinnaker and back down….maybe we should have. We finished the race third, which was a bit disappointing, and when we backed down a massive jellyfish came off our keel. It was unbelievable. What are the chances?

“But we are still ranked first overall. The third place was a bit disappointing and disappointing the jellyfish took the glory of our unbeaten run away from us. But all good fun out there on the Skud course, ” she added.

The fleet started racing in very light wind. Luckily Fitzgibbon and Tesch were on the correct side of a large right hand shift in the opening race, which helped make up for distance they lost later in the race with the unwelcome passenger. In the second race of the day they were back on form, finishing first in the consistent 10 knots.

Fitzgibbon said the 10-boat fleet played snakes and ladders in both races with the pointscore leaders. “We are wold champions so we feel we have a target on our backs.”

Second overall is Amethyst Barnbrook and Brett Pearce (AUS) and third is Jovin Tan and Desiree Lim (SIN) who enjoyed the light conditions, finding them similar to sailing in Singapore.

It was a case of smart sailing from Australian Sailing Team (AST) athlete Matt Bugg in today’s two races. In a new boat he is still trying to get used to, Bugg worked the soft conditions and huge wind shifts of the first race to take out first place.

In the second race the wind built, but a port and starboard on the start with Peter Thompson (AUS) distracted Bugg, leaving him to fight for his fleet position.

“The racing was closer today. It was probably a bit more fun than yesterday. Sailing this new boat, there are still some things I am not 100 per cent sure about. Every day I am getting a little bit more familiar with it, which hopefully will equate into a performance gain. Today’s given me a good buffer, ” Bugg added.

Moving back into second overall is Peter Thompson (AUS) after a fourth and a sixth today. In third place is Paul Francis (NZL), just one critical point behind Thompson.

The long delay for a start didn’t distract Stefania Elfutina (RUS). In each of the three races she sailed smartly and confidently to take out all three first places.

Today’s results gives Elfutina first place on nine points after nine races and a drop, well ahead of Maria Aadland Mollestad (NOR) and Sterling in the six-board fleet.

In the soft conditions Ayvazyan was favoured to take out the first short race, but Bernotas turned the tables on the light air specialist, even after showing slow pace off the start line. In the second and third race in the building SSE breeze, Alexander Askerov (RUS) moved up the fleet into second overall thanks to two firsts.

In third place is Ayvazyan. The top three places are close enough that in the predicted stronger winds tomorrow the leaderboard is likely to change again.

Last night at the SYC’s main Sailing World Cup gala event, officials, sponsors and other guests from the Victorian boating scene gathered to meet the Australian Sailing Team and other sailing royalty for a panel discussion on foiling.

The formula kiting competition got underway today and for the first time foiling races are scheduled over the Medal weekend, December 13-14, 2014.