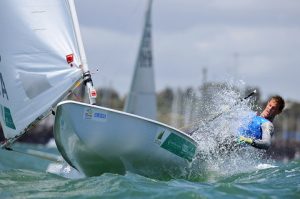 When Mother Nature is feeling cantankerous sailors feel the effects more than a lot of athletes. Day four of the ISAF Sailing World Cup Melbourne produced the most thrilling action yet off the front of Sandringham Yacht Club, and the most drama.

Southerly winds were manageable at an average 22-24 knots, it was the vertical rouge waves and cranky sea-state that brought on some seasickness, cancelled starts and reduced the original racing timetable.

Four classes from the first session were sent out – Nacras, Lasers, 2.4mR and SKUD18 – and they all managed to put two more scores on the board.

For the late session the Laser Radials and the kiteboards were the only two classes on the track. Like storm chasers, Finn sailors go hunting big winds and four of them – Ed Wright (GBR), Oli Tweddell (AUS), Philip Toth (USA) and Sweden’s Bjorn Allannson took off from SYC late afternoon with a photographer and a couple of coaches, just for the hell of it.

There was plenty of air under the Nacras and the images are spectacular. The 2.4mR class reached insane speeds downwind for a 32 year-old class, in what was the their maximum sea state.

Racing was cancelled today for the following classes – Men’s 470, Women’s 470, Finn, Men’s and Women’s RS:X. The 49er and 49erFX fleets headed out briefly this morning before being sent back to shore without starting a race. The results from yesterday stand for those fleets.

Only one day of qualifying racing remains for the 49er, 49FX, Men’s RS:X and Women’s RS:X, Nacra 17, and Men’s and Women’s Kiteboards ahead of their medal races on Saturday.

The top ten competitors in each of the Olympic events will advance to Saturday and Sunday’s Medal Races which count for double points ensuring plenty of possibilities to the end result. Competition leading up to the Medal Races is tough with every point crucial in a bid to make the top ten.

Tomorrow’s forecast is for south to south-easterly 10-15 knots increasing to 15-20 knots during the early afternoon and to 20-25 knots in the late afternoon. Racing starts at 11am rather than midday. 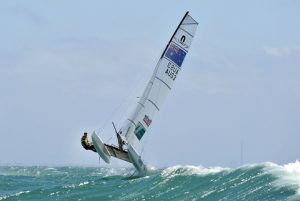 “We get a range of stuff over in the UK, today was nice and breezy and wavy, you have to be able to manage all conditions, ” said Young.

“It was very sailable; it was good to be racing. The pretty steep fast moving waves made the downwind pretty tricky. I’ll do a big job on the refueling tonight ready for tomorrow.”

Drozdovskaya approached today’s racing with trepidation. “I more like the wind of the first day, the lighter wind. Fifteen knots for me is so perfect and waves for me downwind would be excellent.”

There is ice at home so whatever the conditions the Belarussian is pleased to come to the world cup event to train and race. She plans to compete in all of the 2015 ISAF Sailing World Cup events, including, hopefully, the Abu Dhabi World Cup Final.

“I had the same points as Matt today, ” said Burton. “I beat him in the first race and he beat me in the second so it’s a good battle and it’s pretty close. Fifth is my drop, so it’s still looking good, ” a confident Burton commented.

Wearn agreed it was a “pretty solid day. It started off at 20 knots shifty and by the second race breeze picked up to over 30 knots when it started to become more of a slog. It was good racing and a good decision to stay out.”

Belgium’s Wannes Van Laer, a London Olympian, is fourth behind Kiwi Laser sailor Sam Meech. “I like it when it’s windy so today was a dream for me….I want more days like this, ” an excited Van Laer said.“It’s a bit scary with the waves but once you train a few days in heavy conditions you really love it.”

Tess Lloyd and Caitlin Elks (AUS) haven’t moved from pole position since racing commenced on Monday December 7, 2014. Similarly top shelf results by Helene Naess and Marie Ronningen (NOR) have kept them in touch with the Australians. Now another Norwegian duo of Maia and Ragna Agerup is holding onto third.

The ISAF Sailing World Cup Melbourne is the first time racing against a 49erFX fleet and the first competition for new combination Haylee Outteridge and Sarah Cook, a two-time Olympic rower.

Their parents met sailing and when big brother Nathan started sailing out of Wangi Sailing Club at NSW’s Lake Macquarie, middle brother Beau and little sister Haylee didn’t have much choice but to take the tiller.

“Sailing has always been for us a family thing, it’s not just a sport, ” says the youngest Outteridge, who has partnered with Sarah Cook, the former rower late to sailing at age 27.

Nathan Outteridge’s success at the world level is well known. He’s an inspiration to Haylee but she promises there is no pressure being the younger sibling of an Olympic gold medallist, world champion and now America’s Cup sailor.

“I could say I want to win a gold medal at the end of the day but I really want to see what my potential is as a sailor and a person. Nathan and I sail for different reasons; I don’t feel that pressure because I feel we have different goals.”

Outteridge brings natural instinct and 18 years of experience to their campaign. Cook brings experience at the highest level of competition. Until just over two years ago Cook had never sailed and asked her then 470 partner Elise Rechichi why they couldn’t sail directly at the top mark.

She’s found another special partnership in Outteridge and is enjoying the physicality of the skiff. “It’s so aggressive and fast, it’s very similar to rowing in terms of the physicality.

Outteridge and Cook are sitting sixth on the results sheet after nine races.

There was plenty of excitement on Port Phillip for Nacra fleet, some of it welcome and some of it not as they raced in big swells and a gusty 25 knot southerly.

The first race of the day saw the top four in the pointscore finish in that order. The second race, the 11th race in the qualifying series, belonged to Darren Bundock and Nina Curtis (AUS).

The third race began and then was abandoned due to the sea-state, but not before Euan McNicol and Lucinda Whitty went to the aid of Viper sailor Krystal Weir.

“We got around the top mark and just came down to the gybe point, ” McNichol explained. “We got through the gybe and then I heard my name called. I looked around and there were no boats. Then I saw Krystal (Weir) in the water. We dropped the spinnaker and went and picked her up. She was in good spirits.”

Weir knew she’d float onto a beach at some boat so ate the banana from her lifejacket and floated along. “The water was pretty warm so I was lucky. I was yelling at the race committee but they couldn’t hear me with the waves. I had my feet up floating and thought ‘Elwood here I come’.”

In the overall pointscore after 11 races Waterhouse and Darmanin hold first place with Darren Bundock and Nina Curtis in second and Euan McNicol and Lucinda Whitty in third.

Dan Fitzgibbon and Liesl Tesch (AUS/AST) handled the strong conditions with style, taking out race honours in both race 5 and 6 of the SKUD18 series.

Tim Dempsey and Gemma Fletcher (NZL) revelled in the familiar heaving conditions and moved up the leaderboard into second overall.

“It was exciting. Big waves, big wind, lots of surfing, ” Dempsey said. “Back home in Auckland we get a fair bit of this kind of wind so we are reasonably at home in these conditions. We have a bit of a reputation of going well in the heavy and not so well in the light. We are trying to get that monkey off our back at the moment.”

Francis won race 5 of the series and Bugg countered by winning race 6. While others in fleet struggled with the sea swell and strong winds, and some just simply stayed ashore, the two cross-Tasman competitors challenged for the top place on the leaderboard.

“The conditions were fantastic. A lovely day for sailing, ” Francis said. There was a bit of seamanship pumping the 2.4m and keeping it dry. It was a case of a crossover between racing and seamanship. In the second race gear problems forced Francis into second place. The only other finisher to survive race 6 was Neil Patterson (AUS).

Overall Bugg still leads the pointscore with Francis in second and Peter Thompson (AUS) in third.

For a design of its age hitting 13 knots downwind in a 254 kilo boat was “insane” said Richard Scarr, the national Paralympic coach for the 2.4mR and Tasmania’s state high performance coach.

The wind was up and the fleet was screaming downwind in perfect kiteboard conditions. “I usually like the strong winds, ” said the pumped Italian. “I was also impressed that my light wind friends had a good day against me. The first race I crashed and lost the lead. We had some scratches, but that makes the racing fun. We exploded downwind.”

A very disappointed Lisa Hickman has missed the opening races due to a torn Achilles tendon. “I have nursed it for the last week, strapped it tight this morning and headed out for a training run. It became very obvious I was likely to tear it again. I really want to race the medal race on Saturday, ” Hickman said. All going well on Saturday she’ll be back on the water for the Breakwater to Beacon and foiling demonstration on the stadium course, and “giving it her all.”

Up to twenty 2015 ISAF Sailing World Cup Final spots are available in Melbourne, the first stop of the 2015 series.

The International Sailing Federation (ISAF) is the world governing body for the sport of sailing. ISAF is made up of 140 Member National Authorities (MNAs), who are its principal members%