The Seahorse Club held its Annual Awards and Christmas Party, in association with Associated British Ports (ABP) in London on Tuesday, 9th December and welcomed a record number of journalists and industry guests to this celebration of excellence in freight transport journalism.

The highlight of the evening was the announcement of the Seahorse Journalist Awards, 180 guests gathered to enjoy an informal evening with friends, colleagues and professionals from the freight transport sector with all modes represented as well as the forwarding and logistics fraternity. 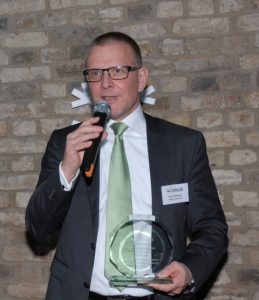 Once again the Seahorse Awards proved very popular with a total of 146 entries from 66 individual journalists from the UK and worldwide. Interestingly a higher proportion of these entries were from outside the UK than ever before. The influence of the Awards is becoming truly international.

Bob Jaques of Seatrade Global was named Seahorse Club Journalist of the Year (sponsored by UK P&I Club) for a trilogy of articles on diverse subjects including over-capacity in the supply chain, safety at sea following a spate of high-profile maritime casualties, and finally an in-depth interview with the CEO of the Scorpio Group. Each article showed a great depth of content and research and were written in a style most likely to engage the reader. 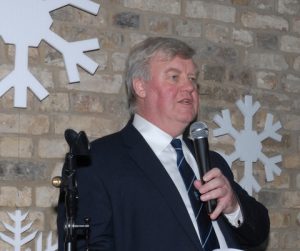 The close runner-up for Seahorse Journalist of the Year was Antje Veregge who is deputy editor of International Transport Journal based in Switzerland.

International Editor of the Year (sponsored by PSA International) was awarded to Paul Avery, editor of World Cargo News. Although Paul has held the position of Editorial Director for a relatively short period of time, the judges wished him to receive this award as a reflection of both his own dedication to the publication and to the longevity and originality of World Cargo News.

Veronika Farkas from IHS Maritime Fairplay was the winner of the Newcomer of the Year Award (sponsored by TT Club) with two further entrants being noted by the judges as highly commended; Joe Lo of Container Management and Anne Roberts of Heavy Lift and Project Forwarding International.

Two Informa journalists were named as the DP World sponsored, News Journalist winners with David Osler of Lloyd’s List coming first to Damian Brett, from Containerisation International as the runner-up this year.

Eric Kulisch based in the US and writing for American Shipper was named Environmental Journalist of the Year (sponsored by Wallenius Wilhelmsen Logistics) with the prize for runner-up also being won by another overseas journalist, Jim Wilson from Lloyd’s List Australia.

The Geodis Wilson sponsored Supply Chain Journalist of the Year was Gavin van Marle of The Loadstar for his consistently relevant piece on e-Returns, a challenge of growing proportions across numerous retail supply chains.

Sponsored for the first time by TIACA, the Air Cargo Journalist of the Year award was given to Martin Roebuck, a freelance journalist writing for Air Cargo World, with Alex Leanne given a highly commended for her article in Airline Cargo Management.

The Social Media Journalist of the Year (sponsored by ShipServ is Girija Shettar from IHS Maritime Fairplay. The judging panel said that Girija had shown a consistent and high-level of engagement with peers and industry alike on multiple social media channels.

The John Rose Personality of the Year Award was presented to Michael Storgaard, Senior Press Officer, Maersk Line, who is widely credited as the architect of Maersk’s transformation from a shipping behemoth that never engaged with the press to one where journalists have had access to employees at every level of the organisation – from executive board members to masters and crew on its vessels. These achievements are to his credit and this award is warmly welcomed by all those in the industry.

Finally, the John Richman Lifetime Achievement Award was presented to the Mark Brownrigg, ex-Director General of the UK Chamber of Shipping, who retired recently after forty years service with the Chamber, eleven of which were as Director General. Mark was praised for his unstinting service to the Chamber and to the shipping industry. His period of office saw many changes in the maritime sector, including the introduction in the UK of the tonnage tax in 2000 that did so much to reinvigorate the British Merchant Marine and the Sea Vision initiative to encourage young people to work in the industry.

The Seahorse Club is a networking group for public relations, marketing, advertising and journalism professionals within the freight, multimodal transport and logistics sectors.