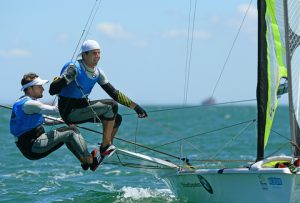 – Ed Wright didn’t put a Finn foot wrong, Nathan Outteridge went off the boil and finished his first 49er race out of the top three, and the Agerup twins from Norway moved up to be equal top of the 49erFX leaderboard.

Day five at the ISAF Sailing World Cup Melbourne was pedestrian compared to yesterday’s blow up on Port Phillip, and all-in-all produced the best day’s racing of the world-class event. The east in the 12-15 knot south-east breeze kept the inshore courses flat; further offshore the seas were lumpier though nothing like the steep walls of green water that forced the cancellation of racing yesterday for most classes.

The qualifying series for the 49er, 49erFX, Men’s RS:X, Women’s RS:X and Nacra 17 is done and dusted and the top ten from those divisions now move through to the Medal Race tomorrow, Saturday December 13, 2014 when the viewing deck of Sandringham Yacht Club becomes the grandstand for the Stadium course.

Sunday’s highpoint is the second round of Medal Races starting at midday for the 470 Men and Women, Finn, Laser and Laser Radial and the spectacular Breakwater to Beacon event for the kiteboarders, both formula and foiling.

This afternoon sailors took time out from the pressure of competition to enjoy the Ronstan Sailors Party.
Easterly winds 15-20 knots turning N-NE 15-25 knots early in the morning is a promising outlook for Saturday. Sunday is looking lighter, northerly winds 15-20 knots shifting S-SW 10 -15 knots in the middle of the day.

Nathan Outteridge and Iain ‘Goobs’ Jensen (Australian Sailing Team – AST) hold a handy 16 point margin lead heading into the double points earning Medal Race tomorrow, which is first up in the sequence on the Stadium course starting at midday.

“We had a bad day today with two thirds, a fourth and a seventh, ” said Jensen. “We’ll have to counter tomorrow to still win the regatta. It was a bit shifty and the boat didn’t feel quite right at times, we were lacking a bit of pace.”

The battle for second is going to be a doozy; just two points separates second to fourth places and the teams of David Gilmour and Rhys Mara (AST), Nico Delle-Karth and Nikolaus Resch (AUT) and Joel Turner and Lewis Brake (Australian Sailing Squad – ASS), in that order.

Tess Lloyd and Caitlin Elks from the AST have fought hard to have it all their own way from the outset. Each day the Agerup twins from Norway have inched higher in the pointscore and this afternoon, with points from 13 races tallied, they sit in second overall on a countback.

“We got focused on the second day after we were protested and disqualified from race 5, ” said skipper Ragna Agerup. “That was the icing on the cake. Now we know we can do it and we are very optimistic, ” she warned on the twins’ chances of taking out the gold medal tomorrow, Saturday December 13.

Maia is still feeling a shoulder injury from the ISAF Sailing World Championships in Santander in September, but it’s not stopping the sisters’ march up the points ladder.
The Norwegians nosedived on a bear away in strong breezes in Spain and Ragna fell onto Maia, damaging her shoulder. “We were a bit worried yesterday, if it happens again she will need surgery and we’ll have to take six months off, ” Ragna said.

The girls’ father is in Melbourne keeping an eye on Maia. The family lived in Perth and is used to the local hospitality, which Karl-Christian describes like this, “being a sailor coming to Australia is like being a skier and coming to Norway, everyone welcomes you and tries to help.”

Lloyd is very conscious that today’s three thirds were below the team’s benchmark. “We have the Medal Race tomorrow and double points make it super important. We just have to go out and win like we have been throughout the week, ” said the Melbourne local. “It will be exciting to race in front of a home crowd; my whole family will be down watching.”

Today’s smooth waters and gentler winds saw the SKUD18 fleet revel as they completed two races on the Stadium course in front of Sandringham Yacht Club.

Dan Fitzgibbon and Liesl Tesch (AUS/AST) continue to dominate with wins in race 7 and 8 of the series. It’s very close between the second and third overall contenders; Tim Dempsey and Gemma Fletcher (NZL) and Amethyst Barnbrook and Brett Pearce (AUS).

For the first race of the day the breeze was shifty and the pressure unreliable. “I had a terrible start, ” Bugg admitted. He found himself in seventh place at the top mark first time and made the tricky decision to gybe away from the fleet. Luckily he found a sweet shift which helped move him into second place by the bottom mark.

“My jib pole broke so I couldn’t really attack Paul (Francis) and I ended up second. It’s quite close between us now.”

Two sets of brothers are dictating the Men’s 470 at the ISAF Sailing World Cup Melbourne.

Twins Alexander and Patrick Conway (AUS/ASS) were looking forward to today’s three races after being held ashore yesterday by the regatta committee due to the sea-state. “It happens at most regattas, ” Alexander said. After a tight race against Antonio and Joao Rosa (POR) in race 5 with the wind shifting and the pressure constantly changing, they finished second. Their early morning enthusiasm then turned into a winning formula for races 6 and 7 of the qualifying series.

For the Rosa brothers, their job out on the course today was to close the gap on the Conways. They won race 5 and finished second twice. “It was nice because we did close races with the Conway boys. They are sailing really well and it was really fun today, ” Antonio said.

“Yesterday we didn’t sail. They cancelled our races. Me and my brother are strong in those conditions. We want more wind for tomorrow, ” Antonio added.

The young team of Sasha Ryan and Amelia Catt (AUS) have continued to dominate Jeni Lidgett-Danks and Jaime Ryan (AUS) with straight wins, but not without a close battle between the two as they race within the Men’s fleet.

The cool and dominant Brit Finn sailor Ed Wright is on form. Four bullets and his worst score of second in the fleet over three days of racing shows the calibre of the sailor who has earned 32 world, European and ISAF Sailing World Cup regatta medals.

Victorian sailor Oli Tweddell (AUS) and Queensland’s Jake Lilley (AST) are throwing everything they have at the Pom, with one more day of racing before the final reckoning.

Before Sunday’s Medal Races Lilley is hoping to have diagnosed a few problems he believes are costing him points. “It’s a different boat and gear here compared to what I race in Europe, the speed is a little down, plus I’ve made a few crucial mistakes.

Lilley beat Wright by two places at the ISAF Sailing World Cup Final in Abu Dhabi at the end of November, 2014.

It’s crowded at the top of the Laser Radial leaderboard. Alison Young (GBR) still holds onto first place overall after taking out a fourth and first in today’s two races. In equal first and second on a countback is Tatiana Drozdovskaya (BLR).

Line Flem Host (NOR) is surprised by her third overall placing. “We (Celine Herud) have been training down here for a long time, first in Sydney and then here. I am really feeling that the training has paid off. These are really good girls, I am full of respect for all of them. I had no idea I would do so well, ” Host said.

“I am pretty new in the World Cup series. I had a bit of trouble keeping up with the best girls in the heavier winds going upwind, but downwind is really working out for me.” Host’s main aim is to win the Laser Radial Women’s Under 21 World Championship in the Netherlands in August 2015.

The 19-year-old seems to have a penchant for fifths and firsts. Today she achieved both again to secure, just, third on the leaderboard, one point ahead of the first Australian, Ashley Stoddart.

The world’s best Laser sailor Tom Burton is on track to qualify for the ISAF Sailing World Cup Final in Abu Dhabi. He marked his name in permanent pen on the Melbourne World Cup points sheet on day one, Monday December 7, and not surprisingly he’s comfortably lead the fleet for the rest of the week, now eight points ahead of Matt Wearn (ASS).
Women’s RS:X

Stefania Elfutina (RUS) is a shrewd Port Phillip competitor. Rarely has she set a sailboard foot wrong on the courses, delivering consistency in her results to achieve a commanding overall lead.

Second overall is Maria Aadland Mollestad (NOR) who had a costly fifth place in the third and final race today. Third overall is in the hands of Anzhela Poludarova (RUS) had a fantastic day with two firsts and a third, but her two OCS’ from earlier in the week are hurting her final points accumulation and in equal place with Joanna Sterling (AUS).

The remaining podium places were taken out by Dmitrii Polishchuk (RUS) with three seconds and third place shared by fellow team mates Alexander Askerov and Evgeny Ayvazyan. Askerov holds onto second overall while Polishchuk has some work to do tomorrow in the medal race to move up from third.

The tension in the boat park prior to the last of the qualifiers for the Nacra 17s was unmistakable.

The five-boat fleet headed out to the south for four races in a small chop and 10-12 knots. Jason Waterhouse and Lisa Darmanin (AUS/AST) had another superb session to win three and claim second in the final race. Euan McNicol and Lucinda Whitty (AUS) were in the hunt with two seconds, a third and then a first to finish the day.

A disappointed Darren Bundock and Nina Curtis (AUS/AST) placed top three for the first races and were looking good for a strong finish in the closing race when it abruptly came to end after their centreboard dropped through the case.

In the overall Nacra pointscore Waterhouse and Darmanin lead Bundock and Curtis, and McNicol and Whitty.

In the women’s competition Ariane Imbert (FRA) is ahead on points.