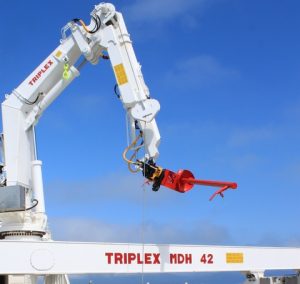 MacGregor, part of Cargotec, has received a major order from Kleven in Norway for six comprehensive deck handling equipment packages. They will be installed on six new-generation Anchor Handling Tug Supply (AHTS) vessels for Maersk Supply Service. MacGregor’s delivery of Triplex and Hatlapa products is planned to start in the last quarter of 2015 and run until the second quarter of 2017. The contract also includes options to equip an additional four vessels. The parties have agreed not to disclose the order value.

“We are proud that Kleven and Maersk Supply Service, a leading shipowner in the offshore industry, have trusted MacGregor to deliver key systems for these new vessels, ” says Pasi Lehtonen, Senior Vice President for MacGregor Offshore Segment. “Having Triplex and Hatlapa products in MacGregor’s offshore product portfolio ensures that both the yard and owner benefit from the advantages of integrated equipment packages supplied by a single company.”

The contract will see MacGregor deliver Triplex 42 Multi-deck handlers, Shark jaws and Towing pins as well as huge Hatlapa stern rollers with SWL 1, 250t to each vessel. The 95m AHTSs will be built to a SALT 200-design from Salt Ship Design and are planned for delivery between the end of 2016 and mid-2017. They will be built at Kleven’s two shipyards in Norway, Kleven Verft and Myklebust Verft.

“We look forward to working closely with both Kleven and Maersk Supply Service on this major order for the success of all parties involved, ” Mr Lehtonen adds.