“Protect Earth in order to attain a Better Life” 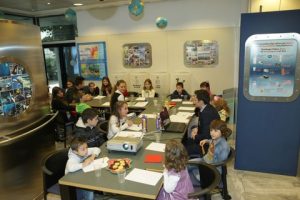 “Protect Earth in order to attain a Better Life” – This is beginning of the message of children, the future citizens of Greece, towards all of us who are keen to listen to their environmental concerns.

Representing 6, 538 kids throughout Greece, who during the 2013-2014 school season participated as volunteer-members in the “HELMEPA Junior” Program and carried out environmental activities, these children constitute the Program’s 21st Board of Representatives. They elected 9-year old Maria Kapellaridi from the Voureio Elementary School of Livadia in Chios as Chairperson, 11-year old Leonidas Priftis from the 7th Elementary School of Corfu as Vice Chairman and 11-year old Constantinos Kolovos from the 3rdElementary School of Pallini as Secretary. During the Board meeting, the children spoke about the experience they acquired from their participation in the Program in each area. On Friday, 12 December 2014, 12 children, aged 5-12 years old, from Agrinio, Alexandroupoli, Corfu, Gournes of Heraklion in Crete, Kalamata, Livadia in Boetia, Livadia on the island of Chios, Pallini in Attica, Parapotamos Thessprotias, Sypiada of Promyri in Pelion, Rhodes and Thermi in Salonica, convened at the environmental exhibition hosted at the premises of HELMEPA’s Μember company, COSTAMARE. 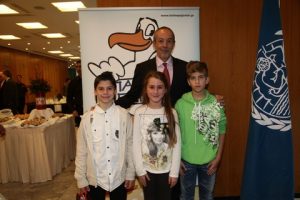 Dr. J. Coustas, Chairman of HELMEPA’s BoD with the new Chairperson, Vice Chairman and Secretary of the Board of Representatives

Parents, volunteer Teachers, Coordinators of School Activities and other guests were welcomed by the Chairman of HELMEPA, Dr. J. Coustas. During his opening address, Dr. Coustas underlined the contribution of the late Captain Vassilis Constantakopoulos towards the Program’s success from the outset, in 1993 and which is now continued by his children. “A systematic effort is being carried out by HELMEPA to raise awareness on the need to protect the marine environment, which is a valuable resource for our country” he said and went on to thank and encourage teachers to continue supporting this effort so that the message passes on to the children “more easily and trustworthily”. 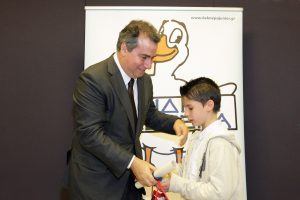 Mr. Ach. Constantakopoulos presents the commemorative diploma to the representative of Attica, Constntinos Kolovos, from Pallini.

The son of Capt. Vassilis, Achilleas Constantakopoulos, on behalf of the family and COSTAMARE, praised the work of HELMEPA Junior and its significance for Greece because through young children it sensitizes and mobilizes us for the marine environment. “Such an environmental awareness must be a priority for all” said Mr. Constantakopoulos, “in order to create responsible and active citizens of tomorrow”. He went on to say that his father had great belief in children, as he believed that they can safeguard the environment. Concluding, Mr. Constantakopoulos stated that “All of us in COSTAMARE support HELMEPA Junior and we will continue the work of Captain Vassilis”. 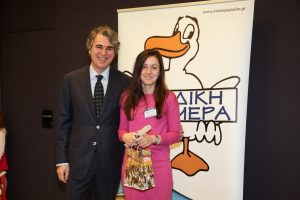 Present at the event was also the Secretary General of the Cypriot Μarine Environment Protection Association – CYMEPA, Dr. Μ. Ierides along with two teachers who are active in the respective environmental education programs of CYMEΡA in Cyprus. In his address, Dr. Ierides mentioned that CYMEPA wishes to follow the example of HELMEPA Junior in Cyprus and towards this direction he proposed to further strengthen the cooperation between the two Organizations.

Addressing the event, Ms. M. Dokopoulou from the Institute of Educational Policy of the Ministry for Education said that “HELMEPA Junior” contributes significantly to the educational process. “TheProgramconstitutes a valuable tool for teachers and nurtures critical thinking among children” added Ms. Dokopoulou, who concluded by expressing the intention of the Institute for closer collaboration with HELMEPA. 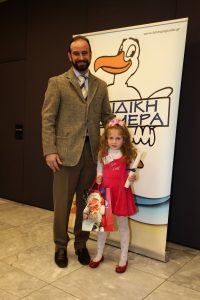 The activities of HELMEPA’s Environmental Awareness Sector during 2014 were presented by Mr. C. Triantafyllou, who placed an emphasis on the voluntary cleanups conducted by HELMEPA Junior Groups in each Region. More than 20, 000 children and volunteers and 1, 000 teachers throughout Greece, he said, participated in HELMEPA’s environmental awareness activities during 2014.

Volunteer Teacher, Ms. E. Skoula, from the Elementary School of Gournes in Heraklion, Crete spoke about the activities of her Group of children. She thanked HELMEPA for all the Association offers in the field of environmental education stating that “the Program brought the pupils in touch with scientists, researchers, captains, people from their local community and helped them broaden their horizons beyond banalities”.

Children and Teachers were awarded with commemorative Diplomas, while the event came to a conclusion with a buffet lunch offered by COSTAMARE and a visit of the Association’s guests to the Evgenides Planetarium, offered by HELMEPA, where they watched a digital projection titled “The Secrets of Life”.

It is important for all of us, however, to pay attention to the message of HELMEPA Junior’s children-members towards us, the adult’s society:

“If we all try together, the environment may offer us a second chance. ProtectEarthinordertoattainabetterlife”.