A well-funded junior exploration company with significant gold and silver resources in the state of Nevada, Rye Patch Gold Corp has been updating investors in London and other financial centres on its progress during 2014.

Bill Howald, president and chief executive, said that the TSX-listed company (symbol RPM) had advanced its project portfolio, achieved substantive results, and completed its target programmes for the year without requiring equity financing and dilution to shareholders.

He said that a robust preliminary economic assessment had been delivered for one of Rye Patch’s top projects, and that here was tremendous exploration upside in its locations amid some of the largest gold and silver producers in the state.

As at all explorers and producers in the sector, the highly experienced management of Rye Patch is keeping an anxious eye on the price of gold which is under continuing pressure: in mid-December 2014, it is $500 an ounce lower than it was in late 2012. 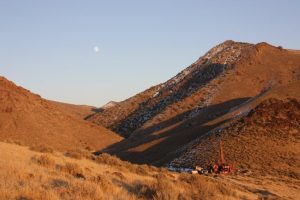 The company nevertheless believes that the economics of its portfolio, which includes financing exploration through a a 3.4% net smelter royalty stream from the nearby Rochester silver mine, which in the first nine months of 2014 yielded $2.6m, portends profitable outcomes even at current international gold price levels.

The intriguing name of Rye Patch is a reference to the wild pastures where 19th century gold rush explorers would graze their animals (there is a Rye Patch state park in Nevada) on their way to the diggings, although the company’s properties are on less vegetative land.

Rye Patch appears to be one of the better-placed companies in its sector, although like many of its comparators, its ‘gold value proposition’ is said to be undervalued by the stock market. 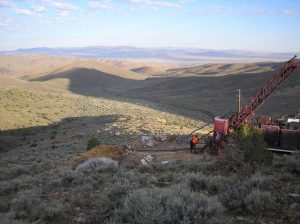 In regard to the commodity price at large, important commentators have faith that within an estimated $5trn market for traded gold, the precious metal’s role as a store of value will see the price recover in the light of financial weakness in major economies.

Rye Patch is exploring two key gold trends in Nevada, which as the world’s fifth largest gold province produces about 80% of US gold, or 10% of gold worldwide. All its projects are located in and around the holdings of senior gold and silver producers (Barrick, Newmont, Coeur) which have operating mines and process facilities. With more than 140 sq km of interests along the Oreana and Cortez gold trends, Rye Patch is emerging as one of the leading junior explorers in Nevada. Nevada, with much of its terrain superficially barren desert, is officially known as the ‘silver state’ although gold is more important to its economy.

The company has attracted the attention of several stock analysts. Thomas Drolet, principal of Drolet & Associates Energy Services Inc and a veteran commentator on energy and commodities, has said that several companies could benefit from a resurgence in gold investing: “I am very high on Nevada and the Carlin Trend of gold mines operated by juniors such as … Rye Patch Gold Corp.” he told The Gold Report (Streetwise Reports) on November 19 2014.

Mr Drolet added: “Smart managers are patient managers. Gold mining is a long-term game. It requires perseverance and expert knowledge about how the overall financial and precious metals markets work.” 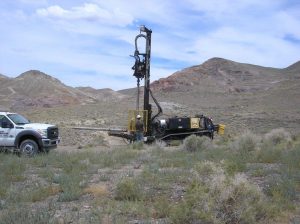 Work at the Wilco Resource on the Oreana Trend.

In May 2014, Casey Research noted that in recent years gold production had declined in Nevada, and as a result, major mining companies will seek to replace their resources and reserves. “Rye Patch Gold will be in an excellent position to provide the shortfall.”

Mr Howald says that in essence the capital expenditure economics of the plan is: “We are going to spend $30m to make $50m.”

He says that the company resources “are at the surface, have nice strip ratios, benefit from gold and silver and infrastructure running through the heart of the district… and with mining-friendly Nevada we are in a realy good jurisdiction.”

During their careers, Mr Howald and his management colleagues have been involved in discovering 100m ounces of gold, and financed and transacted on deals worth over $1bn.