Power of Politics in Japan and the UK 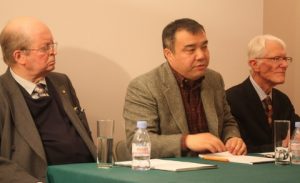 Power of Politics in Japan and the UK: speakers at Daiwa Foundation London event lambast the Thatcher way By James Brewer

Authoritarian political trends in Japan, where conservative leader Shinzo Abe has just secured a renewed majority, and in the UK where forces are gearing up for a General Election, came under attack during the final event of the Daiwa Anglo-Japanese Foundation 2014 London seminar series.

The speakers, Prof Koichi Nakano, a leading commentator on Japanese politics, and Baron Trevor Smith of Clifton, a Liberal Democrat spokesman in the House of Lords, expressed their anxiety over Mr Abe’s symbolic adoption of one of the mantras of the late Baroness Thatcher.

At the height of her term in office, the British prime minister had issued the watchword TINA (there is no alternative) for her tough policies.

Mr Abe, head of Japan’s Liberal Democratic Party which has ruled for 55 of its 58 years of existence, chose to campaign on the same slogan, especially in relation to what has become known as “the Third Arrow of Abenomics, ” which is a big  move towards deregulation and the removal of barriers to trade and direct foreign investment. During a speech at the Guildhall when he visited the City of London in June 2013, he admiringly echoed the approach of Mrs Thatcher, saying: “We will double the balance of direct investment in Japan by foreign companies.”

The evocation of the TINA line was seen as refusing to brook opposition of any kind, and Prof Nakano, of Sophia University, Tokyo, said such an approach was a threat to checks and balances in society.

Lord Smith castigated the new breed of people promoting TINA – there is no alternative – “the most anti-democratic slogan you can imagine. Democracy is about having at least one alternative. That is why you are seeing protests across the Western democracies.” 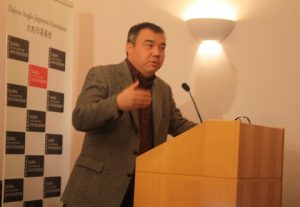 Prof Nakano, who holds two Bachelor degrees from the Universities of Tokyo and Oxford and an MA and PhD from Princeton University, delved into history to elaborate on the proximity of religion and politics in Japan.

He reminded the audience that the Yasukuni shrine (a controversial site because critics say it dignifies war criminals) dated from the Meiji period (1868-1912) and commemorated those who died fighting enemies of the Emperor. It was a shrine to national peace – the peace of the Emperor. Those whom it honoured, warriors who were willing to sacrifice their lives in the Russo-Japanese war, the Sino-Japanese war, and World War II, were prepared to serve and ensure that other people would remain subservient to the ruler.

He said that Japanese politics was “practically frozen” for the length of the Cold War. That structure lasted for 38 years, until under the rule (1982-87) of Prime Minister Yasuhiro Nakasone when Japan embarked on a move to offer voters a meaningful political choice – Britain was seen as the model for that change with the aim of a viable two-party system emerging. Reforms were implemented at a time when the LDP already had a huge amount of power in terms of its cosy relationships with the bureaucrats and media organisations. Even when the LDP fell from power in 2006-09, the opposition Democratic Party of Japan had a much harder time because it was surrounded by hostile forces: a parallel was certain parties continuing to exert influence in post-Communist states.

“One-party domination is very much entrenched, and it is very hard to put an end to it, ” said Prof Nakano. In answer to a question from the audience, he said: “How to change this? I am in agreement with Lord Smith on the need to restore political balance in society. There is too much power given to the technocrats, the mass media, and the big corporations in Japan as well. You do need to restore balance in the wider society.” The media was getting closer to those in power and “it is getting worse and worse. When it comes to documentary programmes and news, it is quite different from what we used to have.”

On December 14 2014, the ruling coalition dominated by the LDP won a two-thirds majority in the House of Representatives, although with slightly fewer seats and on a turnout of 52%,  the lowest in postwar history. 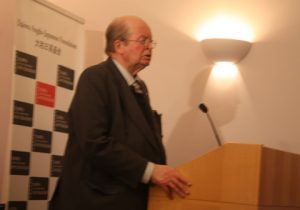 After he was first elected in 2012, Mr Abe launched drastic measures, mainly increasing public spending and printing money, but in the second half of 2014, the economy – which as measured in nominal GDP is larger than that of Germany and the UK combined – slid back into recession after a rise in sales tax.

Prof Nakano said that essentially the proposition Mr Abe put to the public was that his economic remedy was not going to work, “but you need to extend my mandate.”

“That is why, ” continued the professor, “so many people decided not to vote, because it does not seem a good idea to have a second coronation of someone who is failing in economic management.” At the same time, the opposition had no economic policy to offer.

“Why did Abe call this snap election in the first place? He wanted to reinforce his dominant position, so it is back to the traditional Japanese view about making people subservient through state power.”

On another level, there were signs of change, with activism growing since the 2011 Tohoku region earthquake and tsunami 400 km north of Tokyo, but party politics remained rather detached from it apart from the small Communist Party which was making an alliance with the new movements. The Communist Party nearly tripled its number of seats to 21, which will allow it to present parliamentary Bills.

Voters were frustrated, but in the proportional representation section of the poll they did have a choice, and in that the LDP’s share of the vote over the years had remained steady at between 16% and 18%.

Prof Nakano was even more cheered by the poor showing in the election of extreme right wingers.

Prof Nakano spoke of a majority of people choosing to exit from politics. There was a consensus assumption that because of the state of the economy “we do not have the money, and then the debate stops. So there is no way the political parties can compete based on material questions.” When parties were not able to provide much in terms of welfare they competed in the language of extreme identity such as vilifying foreigners. That was one reason why internationally there was emphasis on issues such as gay marriage – they did not cost anything in financial terms.

The problem in many countries was how to have a viable liberal democracy within the local state, when the economy has become so globalised.

Prof Nakano was pessimistic over the development of a healthy two-party framework. In the system in operation in 1955, the opposition ‘socialist’ Democratic Party of Japan and the Communist Party together polled 30% of the vote; the result on a district basis was roughly the same in the December 2014 elections.

“So you have a government without significant checks in the party system, ” said Prof Nakano, and the LDP was getting into areas that used to be considered off limits to party politics, such as the appointment of the governor of the Bank of Japan and other positions.

Referring to politics more widely, Lord Smith said that the situation was moving nearer to the Weimar Republic (the predecessor of Nazi rule in Germany in the 1930s) than ever. Global forces exerted a vast amount of corporate power which was unaccountable.

The peer said that President Eisenhower of the US was brilliantly prescient in his farewell address in 1961 in referring to the growing power of the military-industrial complex. “It is not just the military, it is more widespread, more and more power dictating public policy in most of the Western polity, ” said Lord Smith. “It is why you are seeing all sorts of strange happenings – the Tea Party in the US, Le Pen in France, anti-immigration, the way politics in Scotland has changed – who of my generation would have thought they would have seen this?”

He referred to the “revolving door: one day you work for a major accounting company and devise all sorts of tax dodges. You then get called in to advise the government, then go back to the company to charge more money to your client to get round the more complex rules you have invented. So it is all the same little coterie, all part and parcel of monopoly capitalism which we see in western democracy.”

About the wave of populism, Lord Smith said: “Here we have had this extraordinary thing, the rise of the Scottish Nationalist Party, and that is to the left of the Labour Party; and the rise of Ukip in England, to the right of the Conservative Party.”

Change could be sudden, Lord Smith said. “The Labour Party in Scotland had a monopoly at least as strong [as that of the LDP in Japan]. That has just gone – like that. No media commentator predicted it. The commentary of the media community is appalling.” He posed the question: “Do you think that some of the forces that gave rise to Scottish populism may rise up and bring about a different configuration in Japan?”

With their struggle for housing and with other problems, the new generation “are faced with an appalling prospect and there will be a reaction because you cannot squeeze people with austerity that long.” Lord Smith forecast a backlash leading to a return of the welfare state and a new universal system which would refurbish society as a seismic shift which was part of democracy.

In answer to a question about loyalty in society, Lord Smith asked: “Which institution in Britain now is trusted: the banks, insurance companies, civil service, the churches, doctors? The only ones [perceived by some as trustworthy] are the judges, who when their pensions are mentioned make the print workers [who used to wield huge industrial might to secure high earnings] look like innocents.”

On the nuclear issue, Prof Nakano said that the question had given a boost to the social movement in Japan which was the main reason the country had no nuclear reactors running at present. “The LDP wants to start the reactors, the DPJ is divided, but social protest has made it impossible for this to happen.”

Chairman of the seminar, Prof Arthur Stockwin, Emeritus Fellow of St Antony’s College and the Nissan Institute of Japanese Studies, Oxford University, said that Japan was a bellwether of politics on an international scale. What was happening in Japan was so much part of our general world condition, “and this seminar has brought out that point very sharply.”

Prof Stockwin holds the Order of the Rising Sun from the Japanese government “in recognition of his tireless efforts to promote Japanese studies in the UK.”