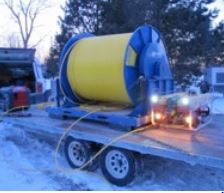 In both Australia and Canada, ASI Marine has established the record for the
longest tunnel swim with a Falcon ROV.

By creatively modifying a Saab Seaeye Falcon ROV, they were able to send the
vehicle through a pipeline stretching over four kilometres under Gladstone
Harbour, Queensland to Curtis Island.

They also sent the same modified Falcon through five kilometres of feeder pipes in
Lake Ontario.

Under Lake Ontario in Canada, the Falcon worked in the worst freezing conditions
on record to run five kilometres down each of three separate 1.6 metre diameter
pipes in a unique project to create the world’s largest cooling system.

This deep lake cooling system feeds the city of Toronto in summer with cold water
to cool the city’s offices – as a sustainable alternative to air-conditioning – then
sends the water onwards to top-up Toronto’s municipal water supply.

Bob Clarke, ASI Marine’s senior operations manager, says they achieved this by
modifying the power supply to the system so that the Falcon could operate over
five kilometres of tether.

This was particularly important for the Australian project, as their client wanted just
a single point of access to inspect the 4.3 kilometre pipeline. 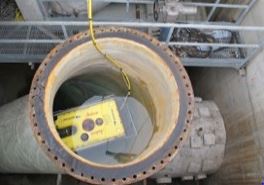 Falcon deployed into one of the three 5km
feeder pipes in Lake Ontario, Canada.

The inspection on the Santos Gladstone LNG Project was conducted with the
Falcon to confirm the condition of the pipeline that was pushed through the utility
tunnel.

The utility tunnel had been bored to minimize environmental impact at the site and
to provide a protected conduit through which to pass the pipeline and other
utilities.

This was the last segment of the pipeline that delivers liquefied natural gas (LNG)
to the Santos LNG plant on Curtis Island. The ROV inspection was conducted to ensure the pipe’s integrity during and after the push.

The Falcon was fitted out with video plus profiling sonar with a BlueView imaging
sonar and Mesotech scanning sonar as additional navigation aids.

Bob Clarke says they chose the Falcon for its “moderate size, good thrust-to-

weight ratio and telemetry capacity”. It is also capable of unlimited inspection
durations, he adds.
The Falcon’s intelligent architecture means each device on the vehicle can have
its own microprocessor for individual control and systems can be easily changed
or added.
Although small enough to be easily manhandled, its intelligent control, combined
with five-strong thruster power and precise manoeuvrability, allows it to operate
sensors, tooling and complex systems typically found on much larger ROVs.

As a module-focussed concept, the Falcon generates automatic diagnostics on
power-up to ensure each device is fully interfaced and working correctly.

In modifying the Falcon to undertake the longest runs ever attempted by a vehicle
of this class, ASI Marine has continued its tradition of developing innovative
solutions for demanding projects. Established in 1987 this specialist underwater
structure inspection and repair company has since pioneered many innovations,
including becoming the first company to develop an ROV for internal pipeline
inspection.

The utility tunnel was bored to minimize
environmental impact at the site.

The green turtle is an important species in the marine environment around Curtis Island. © The State of Queensland
(Department of Environment and Heritage Protection)