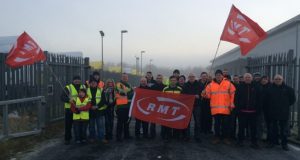 The ITF is backing the demands of its affiliate RMT in the UK for a government investigation into the events in the run up to the collapse of City Link at the end of 2014 and for the company to be nationalised.

Some 2, 400 workers were made redundant on New Year’s Eve when courier and logistics firm City Link was wound up by its adminstrators. The company and its financial backers have no liability for redundancy payments, forcing staff to apply to the statutory government scheme. City Link was working with insolvency advisors from November without telling its staff or RMT. When the news broke, RMT quickly organised rallies in Coventry, Motherwell and other locations.

RMT rep Mick Ward was a driver at the City Link depot at Motherwell, Scotland, and his son and daughter were also employed by the company. He said: “I found out about City Link going into administration on Christmas Eve. I had kiddies’ presents and medical supplies in the van so for the sake of the children and people with serious illnesses I carried on.

“On New Year’s Eve it was confirmed that talks had broken down and we were going to be made redundant. I’ve never been so angry about anything in my life. I am hopeful we can get something else but I don’t know. The economic climate in Lanarkshire isn’t too good.”

RMT general secretary Mick Cash vowed that the union would fight for the company to be nationalised, as it believed it was a going concern and could make money if managed properly and with proper investment in people and new technology. He blamed the failure on poor management, botched mergers and a business model based on the use of subcontractors.

ITF general secretary Steve Cotton took to Facebook on 28 December to demonstrate the global federation’s support for RMT and the City Link workers, and to call for the government’s business secretary Vince Cable to save the company. An online petition to Cable attracted 24, 500 signatures.

Go to the RMT website for the latest developments.