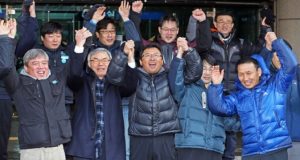 7  Jan 2015 – On December 22, the Western Seoul District Court handed down a non-guilty verdict in the trial of four central rail union leaders, a significant victory for the union and the ITF after a year-long struggle.

While the court found the goal of the strike by the Korean Railway Workers’ Union (KRWU) in December 2013 to be illegitimate, it ruled that the strike lacked the ‘surprise’ character necessary to constitute obstruction of business. Its ruling said:

“Penalizing the simple withholding of labour as a crime of obstruction of business has the actual effect of forced labour… In consideration together of the fact that this could go against Article 12, clause 1 of the Constitution, which prohibits forced labour, and that our nation has been under criticism from the ILO and international society for being the only country that applies criminal penalties to the simple withholding of labour, it is necessary to apply penalties for obstruction of business to simple acts of withholding labour in a limited and restricted manner.”

Sangsu Jo, president of the KPTU, the KRWU’s parent union, commented: “This ruling suggests that the work of the ITF and the ITUC, and the ILO’s urgent intervention, had an impact, and we are grateful for the support we received. We firmly believe that our strike was legitimate. The repression against the KRWU must stop immediately. Our fight to stop rail privatisation will continue, to protect public access and passenger safety.”

The ITF, KRWU, KPTU and KCTU (the unions’ national centre) jointly submitted an ILO complaint on 16 September 2014 against the Republic of Korea for allowing the state-owned Korea Railroad Corporation (Korail) to violate and participate in the violation of the ILO’s principles of freedom of association and its right to strike. And, in a new tactic, the ITF also submitted an amicus curiae (‘friend of the court’) brief to the national court.

The union leaders found not guilty on December 22 were among 176 KRWU officers charged with obstruction of business in relation to the 2013 strike. This ruling is expected to have a significant impact on the outcomes of trials for local officers taking place in 17 localities throughout the country. The prosecution has appealed the verdict, however, and the unions fear that government interference could lead to the ruling being overturned.

The 23-day strike ended on 31 December 2013 after an agreement was reached with opposition and ruling party national assembly members to form a ‘Subcommittee on the Development of the Rail Industry’. However, in January 2014 Korail successfully applied to a court for a temporary seizure of the KRWU’s assets up to KRW 11.6 billion (approximately USD10.5 million) and launched a damages suit worth KRW 25 billion (approximately USD22.7) million against the union.

Find out more about this dispute.

You can also support the ITF’s right to strike solidarity campaign.

All eyes on 3M abrasives at Moorfileds Eye Hospital