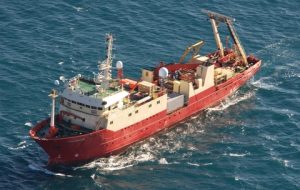 An additional Fugro vessel has been commissioned to carry out underwater search activities for missing Malaysia Airlines flight MH370.

Fugro Supporter, a multi-purpose offshore survey vessel, is currently on its way to the Southern Indian Ocean search area, having conducted trials in Bali. The vessel is equipped with a Kongsberg HUGIN 4500 autonomous underwater vehicle (AUV) which will be used to scan those portions of the search area that cannot be searched effectively by the equipment on other vessels.

The addition of the Fugro Supporter, which is expected to commence search activities in late January, is jointly funded by the governments of Australia and Malaysia.

In December 2014, 65-metre survey vessel Fugro Equator completed a bathymetric survey of around 208, 000 km² of the seafloor, collecting seabed data and transmitting them to the ATSB for processing by Geoscience Australia. The resulting bathymetric maps of the seabed assisted in planning subsequent stages of the MH370 search and ensured safe and effective operation of the underwater search equipment.

Fugro Discovery has been conducting deepwater search operations since October 2014. The 70-metre vessel is equipped with specialist deep tow survey systems including side scan sonar and underwater video as well as aviation fuel detection sensors. Fugro Equator was reconfigured to accommodate similar specialist equipment and has been mobilised to the search area to join the underwater search operations.

In addition to locating the missing Boeing 777 aircraft, the underwater search aims to map the MH370 debris field in order to identify and prioritise the recovery of specific aircraft components, including flight data recorders, which will assist with the Malaysian investigation.

ABOUT FUGRO
Fugro creates value by acquiring and interpreting Earth and engineering data and by supporting its clients with the design, construction, installation, repair and maintenance of their infrastructure. Fugro works predominantly in energy and infrastructure markets offshore and onshore, employing approximately 12, 500 employees in over sixty countries. In 2013 Fugro’s revenues amounted to €2.4 billion; it is listed on NYSE Euronext Amsterdam and is included in the AEX-Index.

Northland Resources to be delisted from Oslo Børs