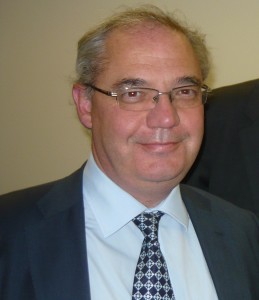 One of London’s top marine insurance personalities, Simon Stonehouse, has taken up his new appointment with Asia Capital Re, which since its launch in 2006 has built up a strong presence in Far East reinsurance facultative and treaty.

Mr Stonehouse was formerly with Brit Insurance, where in a distinguished career he spent 30 years serving the Lloyd’s market.

He said: “Shipping has moved to the Far East which includes the owners, banks, charterers, lawyers, insurers and other shipping-related service industries.  Singapore is the major maritime cluster for Asia.  With that in mind, by moving to Singapore I can be closer to the shipping industry which then makes my risk evaluation easier.”

Asia Capital Re was founded as “the world’s first independent reinsurance company with an exclusive focus on serving clients in the fast-growing pan-Asian region, extending from the Middle East to China and Japan.” It concentrates on large and specialist risks in the region.

In London, Mr Stonehouse has long been in the forefront of the marine insurance debate, urging the market to keep abreast of modern shipping trends such as the advent of larger and more technologically advanced vessels, and of concerns such as ship stability and the apportionment of claims costs between underwriters and shipowners. He has called for fresh thinking across the $8.5bn-premium global marine hull market to find ways to tackle its long record of making losses on an aggregated basis, and to meet the growing demands of shipping in China and other emerging nations.

He has been one of the most prominent participants in the market as class hull & war underwriter for Brit-managed syndicate 2987, as a former chairman of the Joint Hull Committee and its statistics committee, and as a member of the Joint War Committee.  He is a keen supporter of the International Union of Marine Insurance and has served on its facts and figures committee. He was one of the founding members of the IUMI Salvage Forum, of which he is still a member.

Among other duties, he has represented London marine property underwriters on the Lloyd’s Salvage group.

He was appointed marine hull underwriter at Brit in September 2004 having deputised on the account for 10 years. His lengthy experience in marine underwriting has contributed to his skills in statistical research, analysis and risk management.

Asia Capital Re has a respected international board and management team, and its current investors include the Malaysian government’s strategic investment fund Khazanah Nasional Berhad, the Singapore Sovereign Fund Temasek which controls a Sing$223bn-portfolio, Japan’s Marubeni Corp and London-based 3i.

At its inception, Asia Capital Re was rated by AM Best as A- (excellent), with a stable outlook, a ranking which it has maintained. In February 2014, Standard & Poor’s affirmed Asia Capital Re’s financial strength and counterparty credit ratings of A- with a stable outlook. S&P highlighted the group’s “adequate competitive position, supported by the company’s franchise across the region, and … very strong capital and earnings base.” The ratings agency expressed satisfaction with the company’s strategic planning, enterprise risk management and, management and governance practices.

Asia Capital Re is headquartered in Singapore, with branches in Hong Kong and Dubai; representative offices in Taiwan, Japan, South Korea, and Vietnam; and a liaison office in India. Asia Capital Re and its associated companies have aggregated shareholders’ funds of more than US$1bn.

The company says that it “offers a combination of strong Asian dedicated capacity, global underwriting expertise and in-depth knowledge of the Asian insurance markets.” Its reinsurance lines are in aviation, casualty, credit and surety, energy, engineering, marine, medical, motor and property.

In 2013, for a second consecutive year,  The Asset chose Asia Capital Re as Insurance Company of the Year for what it said was its investment excellence.

The company has a licence to invest in the Chinese capital markets under China’s Qualified Foreign Institutional Investor programme.

Thank you for sharing this interesting article about Simon Stonehouse. He definitely has a lot of experience with marine insurance and it is nice to read he is expanding to Asia as well.