Challenges faced by the European Union programme Motorways of the Sea, in the form of new regulatory demands and sluggish economic growth, will be addressed head-on by the next European Short Sea Shipping Conference, set for June 18 and 19 2015 in Copenhagen.

The conference will bring in high-level speakers to assess the needs of the sector and match them to the opportunities offered by the programme, which is backed by EU funds to the tune of Euro1bn, so that the potential can be unlocked at this critical juncture. It will come at the mid-point of a year in which operators in the sector are expected to be under growing pressure from volatile trade flows and lacklustre freight rates.

A comprehensive agenda has been drawn up for the conference, which comes to the Danish capital in 2015, following previous annual gatherings in 2014 in Lisbon and in 2013 in Antwerp. Host cities each year are different member countries of the European Short Sea Network, an initiative supported by the European Commission.

The latest event is organised by the Maritime Development Center of Europe, Denmark, and will be chaired by the man who is very easily identified with the Motorways of the Sea,  José Anselmo. Mr Anselmo is a principal administrator of the European Commission’s Directorate General for Mobility and Transport.

Short sea shipping is said to transport 40% of all freight moved in Europe, with some 10, 000 ships operating solely within Continental waters, and Brussels is keen to increase the share of seaborne goods relative to those that move solely by land. 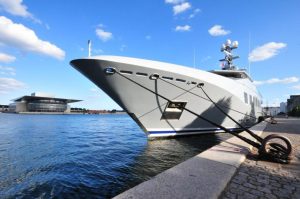 Copenhagen looks to the maritime future. Photo by Danny Cornelissen.

At the Copenhagen conference, there will be a detailed focus on the three main priorities of Motorways of the Sea, namely environment, relevance to the international logistics chain, and safety and the human element, particularly assessing how they impact on Short Sea Shipping. The ultimate aim is to integrate short sea shipping fully into the Trans-European Transport Network (TEN-T) Core Network Corridors. Every TEN-T corridor starts or ends in a port, connecting to maritime operations supporting either internal or external trade operations.

In one of his latest public presentations, Mr Anselmo has said that priorities for Motorways of the Sea in the period to 2020 are that it should contribute to climate change solutions; strengthen cohesion; improve maritime transport integration in the global logistics chain and in the TEN-T corridors in particular; improve existing or establish new maritime links; improve transhipment and hinterland connections in ports; make more connections with inland navigation and rail; and foster the development of the human element and the deployment of new technologies and systems.

He has characterised Motorways of the Sea as a success story to date: between 2007 and 2013 some Euro450m has been spent on the concept, well ahead of the forecast Euro300m. Mr Anselmo has encouraged ports and shipowners to submit applications for grants from substantial TEN-T funds, saying: “Funds are available and now is the time to apply.”

Maritime Development Center of Europe is the national Danish maritime organisation working towards strengthening its business sector. It is a member of the European Network of Maritime Clusters, the European Shortsea Network and the Maritime Innovative Territories International Network.

Day one of the conference (June 18) will have a welcome from a top-level Danish government representative, followed by a senior economist’s keynote presentation of the European short sea market and its supply and demand conditions and outlook.

The opening slots will be quickly followed by more detailed market analysis of roll-on, roll-off shipping; container shipping; the dry and liquid bulk markets; project cargo opportunities; the impact of the offshore industry; and the competition between feeder and dedicated services.

The second session that day will examine the development and prospects for the Motorways of the Sea in four major regions: the Baltic Sea, the Atlantic seaboard, the Western Mediterranean and the Eastern Mediterranean.

Day two (June 19) will be a platform for examining broader issues, starting with the subject of sustainability in short sea shipping.

This will be followed by a session on port and technology Issues; short sea shipping integration into multimodal and intermodal chains, and shifts between modes; the supply chain; and new ship design and technologies.

Next and finally will come a session on policy issues and cost issues. The former will include policy gaps in the short sea shipping market, and the impact of sulphur emissions control areas. It has been suggested that the short sea sector will be unduly impacted by measures to regulate SOx and CO2 emissions, and the audience will be keen to hear the latest assessment of this.

Subsequent speakers will address further the cost issues, and analyse the economics of the industry and what alternative fuels might be available to it in the future.