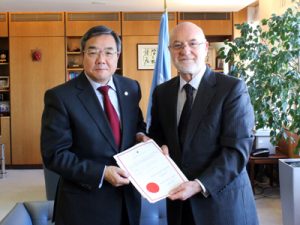 The Ambassador of Albania, H.E. Mr Mal Berisha, has met with IMO Secretary-General Sekimizu (19 January) to depositits instrument of accession to the Protocol on Preparedness, Response and Cooperation to Pollution Incidents by Hazardous and Noxious Substances, 2000 (OPRC/HNS 2000). The Protocol aims to establish national systems for preparedness and response and to provide a global framework for international cooperation in combating major incidents or threats of marine pollution, specifically with incidents involving hazardous and noxious substances.

Intermodal Asia returns to Shanghai for 2015