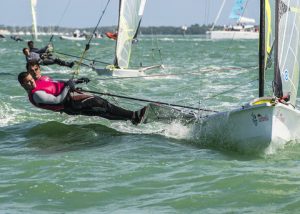 The second day offered a steady diet of breeze in the teens, the allure of a sun-drenched Biscayne Bay, and the kinetic beauty of boats in ten Olympic and three Paralympic sailing classes being put to their best and highest purpose.

We’re still early in a regatta scheduled for six days of racing, including a Medal Race on Saturday for top-ten qualifiers. At stake are qualifying points and slots for the finale of the six-event international series that has become the proving ground of the would-be Olympic sailor.

The finale will take place in Abu Dhabi U.A.E. late in 2015, and after that – After that, an athlete is either ready for Rio and the 2016 Olympic Games, or not.