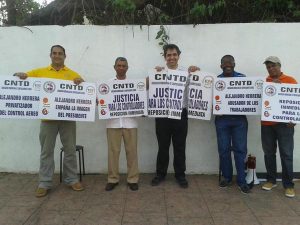 The ITF’s (International Transport Workers’ Federation’s) Americas regional secretary, Antonio Fritz, has been arrested while on a fact-finding mission to the Dominican Republic.

ITF civil aviation section secretary Gabriel Mocho stated: “Antonio was arrested ahead of the press conference he was due to give over the situation in the country, where air traffic control (ATC) services are being put at risk by government inaction and attacks on the AT controllers’ association – whose only crime is to alert the authorities to the hazards.”

“This arrest proves the case we set out on Friday (see www.itfglobal.org/en/news-events/press-releases/2015/february/itf-sounds-alarm-over-dominican-republic-atc-crisis-risk) that the sackings and arrest of members of the Dominican Air Traffic Controllers Association (ADCA) are an attempt to silence them once and for all.”

He concluded: “We are certain that Antonio’s arrest will be proven as unconstitutional and unfounded as the other arrests used to harass association members, and that we will be able to secure his release.”