‘Hands off our right to strike’ demand unions in global campaign 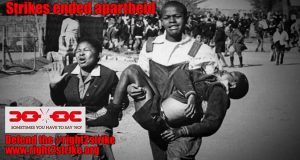 Global union federations and their affiliated unions around the world today mounted an intensive campaign to defend the unalienable right to strike, which is under attack from employer groups at the ILO (International Labour Organization).

The ITF and its sister global union federation the PSI (Public Services International) took part in a rally outside the ILO in Geneva, along with demonstrations at the offices of global employers’ organisations and at key embassies.

Among the many other actions today, transport unions in Bangladesh protested outside the National Press Club in Dhaka; in Bulgaria the FTTUB wrote to ministers and held a lobbying conference with key figures; transport affiliates inBurkina Faso joined a march organised by all the union confederations; and in India the All-India Railwaymen’s Federation organised country-wide workplace meetings and wrote to the government, while the National Federation of Indian Railwaymen launched a thunderclap campaign which attracted very wide support.

The FIT-CISL in Italy launched a membership communication drive, lobbied politicians and organised a public petition; union leaders in Jordan held lobbying and worker awareness events in the run-up and today organised a demonstration; in Switzerland, union activists visited employers’ organisations and the Turkish, Angolan and Indian diplomatic missions; and inUkraine the Transport Workers’ Trade Union ran an SMS campaign which mobilised all 60 of its locals, and brought together over 150 seafarers to agree a resolution to deliver to their government.

PSI general secretary Rosa Pavanelli said that undemocratic regimes attacked trade unions and all forms of protest action while industrialised countries sought to deny public sector workers the right to strike by expanding essential services. She added that free trade agreements and ad-hoc private tribunals that prioritised the interests of multinational companies over the public good aimed to replace the international system based on human rights and international labour standards.

She concluded: “Labour clauses that refer to ILO standards are no guarantee for the respect of workers’ rights if the ILO’s authority continues to be undermined. That is why this is a priority issue for all workers.”

Steve Cotton, ITF general secretary, commented that it was essential that everyone played their part in defeating attempts to undermine or end the right to strike. He said it was a hard-won basic human right and all unions needed to ramp up the pressure on the ILO.

Many unions also took to the airwaves to publicise the issue, including the Barbados Workers’ Union and the Dominica Public Service Union, which broadcast a special radio programme. Several publicised the campaign on their websites, including SIPTU in Ireland, the seafarers’ union TDS in Turkey and CGT Cheminots in France, which launched a dedicated site. Among the ongoing activities, the Libyan TUC and union leaders will meet next week with government and business representatives to agree a joint letter to the ILO group in support of convention 87 on the right to strike.

Visit the Right2Strike website to see how your union can help build pressure on the ILO.  Look out for and use the hashtag #right2strike to join in the ITF’s social media actions and share its visual stream of reasons why the right to strike is vital.

The Year of the Ship…err the Sheep has something to offer:…a plus two for the ailing BDI…