Top Posts
The BDI drops down to 1,540; Wets maintain...
John Faraclas of All About Shipping contributes to...
Irene Rosberg addresses the 22nd Parliamentary Intelligence-Security Forum
Ready to hit the water? So are these...
Coach Fall/Winter 2022: A Collection That Feels Like...
Badgley Mischka Fall/Winter 2022: Wearable Sculpture in Ultra-Chic...
Power, philosophy and heroism of central bankers, and...
New superyacht goes up in flames
American Club Circular no.23/22 – EU Sanctions –...
Hot Port News from GAC
Ulla Johnson Fall/Winter 2022: Organic Forms and Nature’s...
American Club Member Alert (August 12, 2022) re...
Witherbys leads the way in digitisation as 5,000...
Home Associations Subsea autonomy prominent at UDT 2015 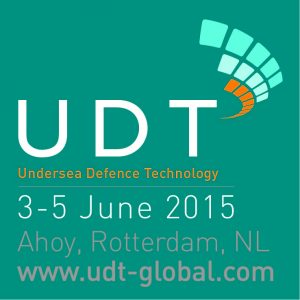 Autonomous systems will feature prominently at UDT 2015. UnmaAhoynned system activity in the subsea market is growing fast. The importance of unmanned systems is reflected in both the UDT exhibitor base, and in the conference stream. UDT 2015 will take place at the Ahoy Convention Centre in Rotterdam, Netherlands, from 3 – 5 June 2015. Rotterdam is a key maritime city and an important global maritime link for international naval forces and trade. This was illustrated recently when Rotterdam was visited by Chinese warships that had been tasked on an anti-piracy mission in the Gulf.

The themes of the UDT conference are in concert with the direction that undersea tactics and the undersea industry are moving. ‘Underwater Capability for an Uncertain Future’ is the overall theme of the UDT 2015 conference.

Simon Williams, Chairman, Clarion Defence & Security, says, “The conference is renowned for its responsiveness to significant developments in the subsea environment, not least in countering the evolving threat portfolio. This fact is reflected in the 2015 agenda which encompasses submarine warfare, anti-submarine warfare, mine warfare, hydrography/environmental assessment and maritime security.”

Subsea developments have steadily increased in recent years. The principle driver for subsea growth is an increasing trend towards deepwater oil and gas and the emerging deep sea mining developments brought about by continued demand for oil, and the need to replace maturing shallow water basins as well as, the increasing demand for precious metals and marine renewable energy.

The growing importance of the subsea autonomous sector will be in evidence on the exhibition floor. French company ECA, exhibiting for the first time in 2015, design and manufacture a wide range of unmanned systems. Their subsea applications range from survey to inspections to mining to tracking of telecommunications and power cables. Among the solutions proposed by ECA Group, are autonomous and specifically designed systems that carry out a variety of inspection tasks from ultra-deep offshore oilfields to inspection of pipelines, risers and mooring lines.

Returning exhibitors include ThyssenKrupp Marine Systems GMBH,  Copper Alloys Ltd, MTU Friedrichshafen GmbH who are exhibiting for the first time outside Germany since 2010, and Abeking and Rasmussen. Teledyne RD Instruments are increasing their presence by nearly 20m², while other primes confirmed include Babcock International Group,  Saab and Atlas Elektronik GmbH.

Other exhibitors include EvoLogics GmbH,  who specialise in underwater communication and positioning systems such as the EvoLogics Sonobot – an autonomous unmanned surface vehicle for hydrographic surveys. It was developed to provide surveyors, service providers and researchers with a smart lightweight solution for hydrographic surveys and other applications in harbours and inland waters. Kongsberg Defence Systems,  leaders in submarine and surface ship combat systems and mine counter-measures systems have developed C Inspector; a multipurpose ROV which combines the autonomous features from an AUV with the interactive capabilities of a ROV. It can be used for inspection, interactive threat identification and intercept.

UDT 2015 will be the 28th edition.  UDT is the only dedicated undersea defence technology conference and exhibition, bringing together naval procurement specialists, defence scientists and key technology providers for discussion, networking and the examination of new technology. The event, which is staged in Europe and Asia, covers the entire spectrum of undersea defence and security technology and the emphasis is very much on preparing for the future by identifying today the factors that are shaping the future of undersea security.

Did events in Ukraine force the change of Greek tactics?