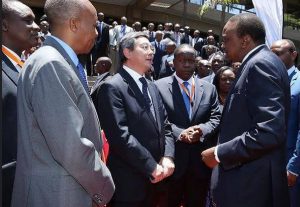 from the IMO’s Secretary-General Koji Sekimizu visit in Kenya

23/02/2015 IMO Secretary-General Sekimizu is in Kenya, where he is giving a keynote speech at the Kenya National Maritime Conference​. http://www.kma.go.ke/nmc2015/

Ahead of the Conference, Secretary-General Sekimizu paid a courtesy call to Eng. Michael S. M. Kamau, Cabinet Secretary, Ministry of Transport and Infrastructure, Republic of Kenya, at his office, where they shared views on maritime and shipping infrastructural development in Kenya and in the region.

The Cabinet Secretary informed the Secretary-General that Kenya has made significant progress in the development of maritime and economic infrastructure, especially in rail linkages to ports, in order to facilitate the movement of goods and services, while there has also been progress in developing and expanding economic activities in Lake Victoria. The Japanese Government has been an important partner in supporting maritime infrastructural development in Kenya.

Secretary-General Sekimizu congratulated the Kenyan Government on progress made so far and stated that IMO is poised to redouble its efforts to support, not only Kenya, but African countries in their quest for maritime development. Mr Sekimizu said that there was a need to establish an African Maritime Development Plan, against the backdrop of the 2050 Africa Integrated Maritime Strategy (2050 AIM Strategy). Mr Sekimizu said that maritime transport policy was at the core of maritime development for any country, but especially in developing countries, adding that IMO stood ready to assist countries in the development of their maritime policies. ​​ ​​​​​​​