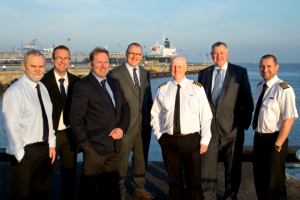 Associated British Ports (ABP) has announced changes within its marine department on the Humber, which will allow an improved service from a newly consolidated team.

Capt Phil Cowing has taken up the newly created role of Head of Marine Humber, with responsibility for co-ordinating and leading all marine activity on the Humber, reporting to John Fitzgerald Director Humber. Phil will also continue in his role as Marine Advisor to the ABP Board. Capt Andrew Firman replaces him as Harbour Master Humber.

Capt Martin Gough, formerly Dock Master Humber, has taken up the new role of Marine Training Manager, reflecting the importance ABP is placing on its industry-leading Marine Apprenticeship Scheme.  The scheme will be expanded in 2015 to include the first intake of Marine Pilotage Apprentices.

The company has also seen changes with the pilotage service, with Matt Booth moving up to the role of Deputy Pilotage Manager Humber, and Andy Swift becoming Deputy Harbour Master and Pilotage Operations Manager Humber.

Phil Cowing commented:  “Historically the ABP Humber ports and Humber Estuary Services (HES) have been run as separate marine functions, but the time is now right for a more integrated operational approach whilst still maintaining the transparency and impartiality of HES for the provision of pilotage and conservancy to all river users.

“An integrated approach removes unnecessary duplication and demarcation to provide a more streamlined and efficient service for the ABP ports, whilst HES will continue to provide high levels of service and support for customers at the non-ABP locations throughout the harbour area and the wider stakeholder groups.”

He added:  “These are exciting times for the Humber with planned growth on both banks to support the offshore renewables industry as well as plans to relocate VTS Humber from Spurn Point to a new integrated Humber Marine Control Centre at Grimsby.

The concept of an integrated marine team should serve us well in managing future growth and changing traffic patterns in the Humber and sits well with the concept of continuous improvement enshrined in the Port Marine Safety Code (PMSC), the national standard against which all Harbour Authorities are measured.”

*velopment of the UK’s largest offshore wind turbine construction, assembly, and service facility, which will be located on the Port’s Alexandra Dock. This new facility, coupled with a new rotor blade manufacturing plant, represents a £310 million investment and will create up to 1000 direct jobs.