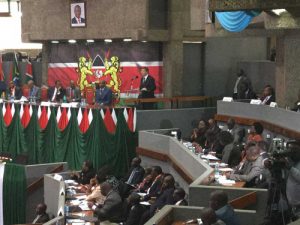 “From land to sea: New Frontiers for National Development”
Kenyatta International Conference Centre, Nairobi
Opening remarks by Koji Sekimizu
Secretary-General, IMOYour Excellency President Uhuru Kenyatta, Cabinet Secretary Engineer Kamau (Principal Secretary Mr Nduva, Excellencies, distinguished guests, ladies and gentlemen, It is both a pleasure and a great honour to be here and I am grateful for the opportunity to participate in such an important conference on a subject of great significance for African development.Over the next two days, you will be focussing on the many opportunities available to your nation through development of a “blue economy”, in other words, maritime development.The seas and oceans have always been central to mankind’s well-being and development. But in the past, the importance of embracing all the many different ways in which we can gain advantage from our relationship with the seas, oceans and maritime transportation have not been properly recognized.

It came to prominence in the preparatory process for the United Nations Conference on Sustainable Development (UNCSD), held in Rio de Janeiro in 2012, known to the world as Rio+20.

Rio+20 was to have a clear focus on the “green economy” concept in the context of sustainable development and poverty eradication. But many countries felt that a focus on a maritime economy, an economy focused on the seas and oceans and maritime industries, would be more appropriate for them.

There is now a strong international momentum behind this concept which has been reflected in a number of initiatives, including my own initiative at IMO to create a blueprint for a Sustainable Maritime Transportation System, which we developed with the shipping industry in London following the Rio+20 conference.

The huge potential of the oceans and the maritime industry to assist in the development of the African continent has already been noted. It is recognized in the following key documents, namely:

And the African Union has expressed its commitment to embracing and developing the ‘’blue economy’’ concept as a vital part of Africa’s future development.

Such a Plan should be composed of:

IMO will work closely with the United Nations’ Development Programme (UNDP) and provide assistance to African countries to establish their own maritime transport policies. IMO will continue to provide opportunities for African countries to educate future maritime leaders at the World Maritime University and International Maritime Law Institute.

IMO will review and strengthen the current Technical Cooperation support system to provide a better mechanism for TC activities to next and younger generations of maritime experts in IMO Member Governments.

Efforts of the Technical Cooperation Division at IMO Headquarters, efforts of regional offices and efforts of WMU should be more integrated. In addition, we should integrate efforts of hundreds of graduates of WMU and IMLI.

International trade is critical to many African economies, with over 90 per cent of Africa’s imports and exports being carried by sea. Information and communication technology is increasingly important, but it cannot replace the critical functions of maritime transportation for agricultural and industrial prosperity in all countries. The promotion of seaborne trade is therefore essential for African development.

But in order to realize Africa’s full maritime potential, you must identify – and support – those sectors with the most growth potential and on which economic development and sustainable job creation can be built.

As is the case of other African countries, here in Kenya, there is also an urgent need to develop a formal national maritime policy in order to identify consistent steps to be followed in improving the status for Kenya as a maritime nation, mapping out maritime clusters and working in harmony to achieve a blue economy. This conference will be an important milestone in that process and you are to be commended for putting together such a timely and relevant programme.

The fact that we are honoured today by the presence of His Excellency President Uhuru Kenyatta serves only to emphasise how central maritime industries are to the development of this country; and I am sure I speak on behalf of everyone, your excellency, when I express my gratitude that you could spare the time to be here.

Mr. President, I am Japanese and so I can speak about the Japanese development experience towards industrialization.

Japan was the first non-Western European nation that industrialized its country. It started 150 years ago, when a new Government was formed in Japan. The Government sent young people to Europe and America and it also invited hundreds of teachers and professors to Japan. They created a robust education system and national universities. The people were determined to create a wealthy and strong nation through industrialization. A national industrial policy as well as passion by the Japanese people for education was essential for this process and within 50 years, Japan became one of the maritime powers of the world.

This year marks 70 years after the last war. In 1945, when the war ended, Japan lost everything, but for one thing – its people, and their  passion for education, particularly science and technology. What was effective to create this economic miracle and make Japan one of the most powerful industrial nations was its industrial policies and in particularly, industrial policy for shipping and shipbuilding.

The secret of Japan’s economic success is maritime development. Japan is surrounded by sea, therefore industrial centres were arranged along the coast-lines. Seas and oceans connect you to the world. What was possible for Japan should be possible for any nation which has access to the ocean. Maritime development will lead Kenya and the eastern region of Africa to become a prosperous and wealthy region in the 21st century.

Distinguished guests, Kenya has much to work on – this is no secret to the country’s maritime community and it is why you are here today.

In this context, I noted while some structures for maritime training have been developed and some institutions such as Bandari College and Jomo Kenyatta University of Agriculture and Technology are conducting training. But the lack of training opportunities onboard ships for cadets is a major concern. It is important to focus on how to ensure that comprehensive training is available. Measures to establish national shipping companies, or to offer incentives to ships calling on Kenyan ports to make training facilities available for Kenyan cadets, need to be identified, evaluated and negotiated bilaterally. A more ambitious plan should be the establishment of a national seafarers training institute with a training ship as many powerful maritime nations possess.

Maritime security is another essential element of effective and sustainable participation in the blue economy. Recent years have been challenging and difficult in this respect, in particular for the countries on Africa’s eastern coastline. Through the Djibouti Code of Conduct, Kenya and the other countries of the region have been working very hard to strengthen and reinforce their capacities. As a result of these and other efforts we are now, I am pleased to note, in a situation where incidents of piracy in this area are at their lowest for many years. Kenya has maintained a forefront position in suppression and prevention of acts of piracy and armed robbery against ships and has played a major role in this regard. Mr. President, I thank you for this. But security must continue to be a high priority to guard against a resurgence. Complacency is not an option.

Your Excellency, Ladies and gentlemen, returning once again to a global level, there has been a growing appreciation that effective governance and management of the world’s oceans and seas and the maritime industry require coordinated action.

It is difficult to measure precisely the worldwide economic value of ocean-based goods and maritime services, but all estimates place the figure in the trillions of dollars.

It becomes clear that we are addressing a very sizeable industrial sector – and one that is growing, too. In my view, Kenya has a huge potential in exploring the maritime future.

Excellencies, distinguished guests, returning to my statement on an African maritime development plan here today, the key for success in ensuring maritime development is to go for all of the four programmes simultaneously. Maritime policy, leaders and experts development, infrastructure and security management – they must be implemented together, hand in hand. A comprehensive approach is required and therefore, the commitment by the Government for all of the four programmes would be required.

I am sure, having discussed the maritime development agenda with the Cabinet Secretary, Minister Kamau on several occasions, I know that Kenya has a clear vision towards maritime development and would lead the African countries in this field. I am sure that this Conference would reconfirm the commitment and determination of the Government in exploring the maritime future of Kenya with the pioneering spirit and I am feeling now truly honoured to have been provided with an opportunity to address you today. I wish you all the best for a successful and productive conference.