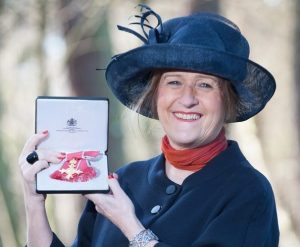 IOE Director General Lesley Batchelor has received her OBE for services to business at an Investiture at Buckingham Palace held by The Princess Royal on behalf of the Queen.

A champion of UK exporters, Lesley is a graduate of both the Institute of Export and the Chartered Institute of Marketing. She has studied as an intellectual property auditor and has additional expertise in global licensing and marketing.

The prestigious OBE reflects Lesley’s ground breaking achievements, elected chair of the IOE in 2007 and appointed Director General in 2010, Lesley has shaped policy and decision making at the highest levels. A member of the Advisory Panel and active member of the All Party Parliamentary Group on Trade & Investment and the All Party Manufacturing Group, Lesley gives evidence to The House of Lords Select Committees on various issues affecting international trade and Government support for SMEs.

Lesley said: “It was a great honour and a privilege to meet Princess Anne who made the investiture personal and memorable for 93 people, including myself, who received their special awards. I was also impressed with The Princess Royal’s knowledge of international trade developments.

“It would have been impossible for me to achieve these milestones on my own and I would like to say a big ‘thank you’ to our members, our board, our team and everyone who has supported our journey to the present day.”

Lesley’s powerful track record in international trade and export marketing spans over 17 years working with blue-chip giants including Fujitsu Europe and Coca-Cola Europe, before setting up CMC Marketing in 1992 where she helped over 1, 000 SMEs to understand how world trade worked and how to enter new markets.

The Institute of Export – the only professional body in the UK offering recognised, formal qualifications in international trade – is marking its 80th anniversary in 2015.

About the Institute Of Export
The Institute of Export (IOE) was established in 1935 and is incorporated as a registered charity under the patronage of HRH The Duke of Kent. The Institute’s mission is to enhance the export performance of the United Kingdom by setting and raising professional standards in international trade management and export practice. This is achieved principally by the provision of education and training programmes.

Dedicated to professionalism and recognising the challenging and often complex trading conditions in international markets, the Institute is committed to the belief that real competitive advantage lies in competence and that commercial power, especially negotiating power, is underpinned by a sound basis of knowledge.

The IOE is the only professional body in the UK offering recognised, formal qualifications in International Trade. As an awarding body with the QCF the IOE is registered to make and grant qualifications. This includes modern apprenticeships, foundation degrees and all six levels of the National Vocational Qualifications (NVQs).