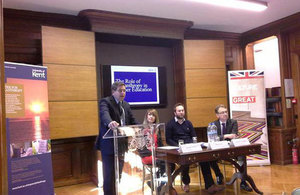 UKTI Greece hosted a debate on the role of philanthropy in higher education led by the University of Kent’s Centre for Philanthropy.

On Thursday 19 February 2015, UK Trade and Investment (UKTI) Greece helped organise an open debate on the role of philanthropy in higher education. It was held as part of a series of workshops organised by the Initiative for Heritage Conservancy (IHC) which will also include presentations by UK companies and museums later this year. These collaborations came about as a direct outcome of the recent ‘Culture is Great’ event hosted by UKTI Greece in October. The scene for the debate was set by the representatives of the Centre for Philanthropy:

The audience included representatives from:

They took part in a discussion on the issues raised by the panel, but also introduced others more directly relevant to the Greek experience. The debate brought to the surface: