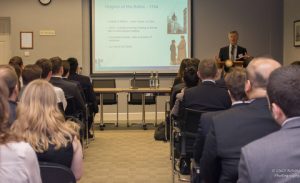 ‘Our Word, Our Bond’ still an important part of the London shipping community

The first Shipping Professional Network of London (SPNL) event for the year, which took place on 25th February 2015, featured a keynote by Jeremy Penn, CEO of the Baltic Exchange.

The theme of Jeremy’s session was how the Baltic Exchange has served the shipping industry since 1744 and how it continues to play an important role today.

Jeremy Penn started the talk informing attendees of the history of the Baltic Exchange and it previously being named Virginia and Baltic coffee house.“This was to attract merchants and sea captains in the Baltic trades. Baltic merged with the London Shipping Exchange in the 1900’s and formed Baltic Mercantile Shipping Exchange, which was dominating in the early years. At its height London was dominant in international shipping and trading.” 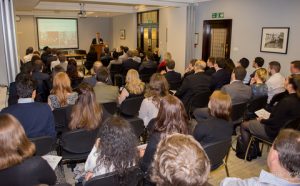 Jeremy went on to explain the meaning of the Baltic code –stating “All those years ago with trying to reign in unruly behaviour in the coffee house led to the idea to have a motto ‘our word our bond’.  One phrase really covers everything; it’s more elaborately expressed in the Baltic code. Which is certainly a list of thou shalt not. We do try to set standards of behaviour.”

Jeremy continued, “It was essential in the days of the trading floor. If you went on the trading floor to negotiate, you had to know exactly what authority you had and who had given it to you. If you negotiated on the trading floor without having the authority then that could have been catastrophic for everyone involved. It was very important that everybody knew exactly where they stood. That’s why the motto ‘our word our bond’ and the integrity is so important otherwise it would just be a mess if people had negotiated without the level of authority and understanding where they stood.”

At the end of the talk, a question and answer session followed, taking us in to the evening with networking in full swing at the Baltic Exchange which was at capacity with young shipping professionals. 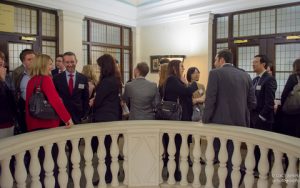 Claudio Chiste, SPNL Chair who works at Investec bank plc (Shipping & Finance)stated afterwards: “It is important to inculcate this age old valued tenet – integrity – captured by the motto “Our Word, Our Bond” which has served the Baltic Exchange hundreds of years. Although the Baltic Exchange may be London born, as is SPNL, these words continue to be relevant around the world today. At a time where financial centres face scrutiny and heightened regulation to reign in on perceived self-serving attitude.  We – as SPNL – with our global presence (SPN spin-offs branches and international co-operation) have a role to play in communicating this to the next generation”.

The Shipping Professional Network in London (SPNL) is run by a group of dedicated young shipping professionals, and enables young people in shipping to network with members from across the maritime industry.