Top Posts
Hot Port News from GAC
MarISOT
Don’t take chances where your health is concerned…
Stage is set for final Medal Races at...
Union fury as Scottish Government charter union busting...
US and EU need one another, G7 finds...
Transport Infrastructure Financing course – 20-24 September 2021...
Exceptional Dry Market surge amid enigmatic Geopolitics and...
Landmark Marine film unveiled as the global spotlight...
Thermo King Announces Development of a Bachelor of...
Hot Port News from GAC
Dutch Olympians remain in control at the Hempel...
We’re Half Way There! Will You Join Our...
Home HRArt and auctions Ceramic splendour…
Art and auctionsAssociationsEventsExhibitionsPaintings and Sculpture 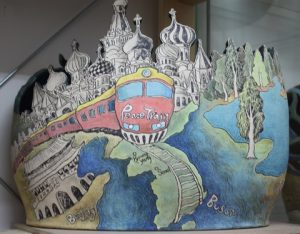 Ceramicist Sarah E Choi renders remarkable scenes in clay, inspired by love for her native Korea and by having made her home for several years in Britain – all interspersed with a clear message of her concern and hope for humanity.

Her most recent representations include meticulously detailed views of the Thames close to St Paul’s: we see not just the jostle of dominant modern edifices, but shapes of a good-natured gaggle of passers-by.

Then there is a dramatic, collage-like celebration of the Peace Train, which in 2013 rattled along 11, 000 km of track from Berlin through Moscow, Irkutsk, Beijing, Pyongyang and Seoul to its destination, Busan. The South Korean port city was where the train’s sponsor, the World Council of Churches, had gathered for its 10thassembly . Some 130 people from 16 nations had travelled for 20 days on the Peace Train to draw attention to the division of the Korean peninsula. 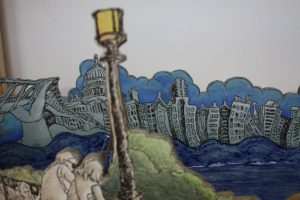 Through her ceramic tribute to the symbolic train journey, Sarah expresses her sympathy for reunification of the two Korean republics.

Juxtaposing images and inscribed text, the sculptural Peace Train is typical of her skill at encompassing stories and microcosms of society in pieces that seem to pulse with rhythm and energy. As an expression of optimism for the human condition, the mélanges are treated with a transparent tenderness.

The striking scenes that Sarah creates are the product of building the clay structure by hand, a process known as coiling as opposed to using a potter’s wheel. Coiling – constructing ceramic forms by joining strands of clay with the fingers – has a long history that some say stems from ancient Greek times around 2500 BC and from Asia of old, as the need grew for taller vessels and greater control in their individual manufacture.

Sarah prefers the hand-building technique as it is ideal for engendering a more human touch that can be expressed through sculptural effects. The emphasis is in the processing, rather than the finishing.

Coiling requires more time than using a wheel, and with the hands in control it results in unevenness – sometimes a crumpled look that can be full of character – on the surface of all the work. Sarah makes two or three layers of different colours of slip, and works them at what she judges to be the right moment of lustre or dryness. It is a delicate operation to apply the right pressure. Hand-building with clay demands the material has to have a certain degree of moisture at the right moment: if it is too soft the construction will collapse, if too hard it will break.

Some of Sarah’s stoneware produced by coiling is up to 60cm tall, perhaps a reflection of the fact that before turning to clay sculpture, Sarah focused on creating metal works by spot-welding, sometimes labouring to join together thousands of pieces of copper-coated wire. The same deft touch is required to cope with the fragility of clay as it takes shape ready for firing.

Sarah’s studio – kept immaculately in contrast to the usual standards of the artist profession – is one of more than 50 managed by Hawks Road Artists, a complex converted from a 1950s joinery factory at Kingston-on-Thames. 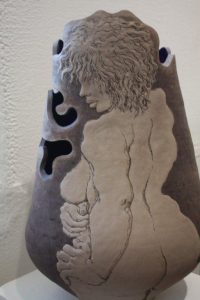 At the London Potters Annual Members’ Exhibition in December 2014 (she had won the award for the best trio of exhibits the previous year), Sarah showed three pots adorned with life drawings in low-relief sgraffito, a technique considered a bigger challenge than high-relief. She treats the vessels in course of development as though they are painters’ canvases, applying colour glazes, under-glazes, oxides, and slips.

One of the women she sketched in life classes some time back continues to be a muse, even though they have lost touch. The generously curvaceous subject was of West Indian origin and “through her I can still see the Caribbean sunshine.”

The model is depicted at the front of two of the pots, and on the reverse of one is an extract from an ode by William Wordsworth,  Intimations of Immortality from the book Recollections of Early Childhood. This includes the lines Though nothing can bring back the hour/ Of splendour in the grass, of glory in the flower;/ We will grieve not, rather find/ Strength in what remains behind. 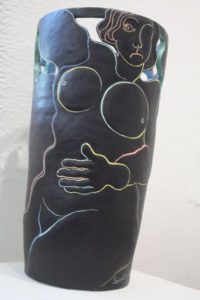 Another Low Relief Life Drawing on Pot, by Sarah Choi, and shown at London Potters exhibition.

A companion piece is inscribed with the 1978 poem Still I Rise, by African-American rights activist Maya Angelou (1928–2014) whose surname came from her husband, a Greek seafarer. Maya’s quoted words areYou may write me down in history/ With your bitter, twisted lies/You may tread me in the very dirt/ But still, like dust, I’ll rise. One of these pieces has a brownish hue, the other was made with black slip first, then pale blue. On occasion, Sarah uses the natural colours of clay to indicate cultural and ethnic differences.

Honesty such as that of Maya Angelou is a virtue much lauded by Sarah. “I feel quite sad when I see people change their appearance from what they have been given. We all have our individual beauty: and our diversity is our real beauty, seen in appearance, character, culture and so on. I wanted to get that kind of message into my work.”

Sarah achieved a BA in sculpture, and a teaching degree, at Ewha Womans University, South Korea, an institution which has been a pioneer in women’s education.  She taught at the private at Ewha Art Institution for 12 years before leaving for the UK, where she studied at the University of West England. She had a private art studio at Milbourne Port, a village near the border of Somerset and Dorset, and led the Milbourne Port Art Group, later moving to southwest London. 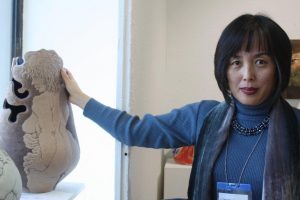 Several of her works have recently been on show at various venues and galleries, and she is preparing for further exhibition participation in the near future.

The artist’s site is www.sarahechoi.com