Fracino is now exporting its espresso and cappuccino coffee machines to every continent across the globe after clinching a major contract in China, selling an unprecedented number of machines to Australia – and making waves in Antarctica.

Since taking advantage of the weak pound in 2008, the multi-award winning 3rd generation family business which is renowned for selling its coffee machines to the Italians – now exports to over 70 countries across seven continents.

Success in international trade has resulted in Fracino doubling its turnover to over £4 million since 2009. Currently producing in excess of 4, 000 commercial and domestic espresso machines a year, exports now constitute over 25% of turnover.

A Chinese consortium, which owns shares in a series of restaurants and cafes in Guangzhou and Hong Kong, has commissioned its first container of machines after witnessing Fracino’s world class manufacturing techniques at first hand during a three day visit to Birmingham. 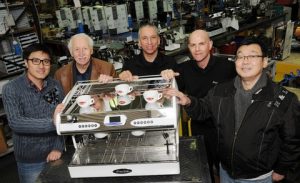 Another milestone sees £250k of machines – the highest volume ever – being exported to Fracino’s Australian division in Queensland. The manufacturer has also sealed a contract to supply Australia’s Antarctic flagship – Aurora Australis – a multi-purpose research and resupply ship in Antarctic waters which also supports Australian bases in Antarctica.

Working with over 40 distributors globally, in the last year alone machines have been sent to 13 new countries including Guatemala, Lebanon, French Polynesia and Croatia.

Fracino MD Adrian Maxwell, said: “Ongoing investment, innovation and team development is fuelling our export drive – enabling us to grow our team by 25 per cent over the last 12 months. Producing seven machines since 2008, we have invested over £3m in recent years and are proud that our export strategy has been entirely self-funding and 99 per cent driven in-house.”