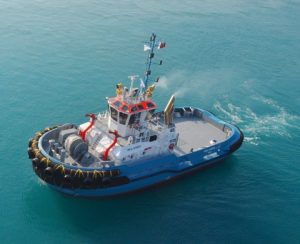 The vessels were built in Qatar, and are part of a seven-vessel order

The delivery of the two ASD 2810 tugs is part of a seven-vessel order that the yard is currently working on for NSW. The first of the new tugs, named Umm Al Shubrum, completed sea trials in Ras Laffan in mid-January 2015. She was followed in February by the second vessel, Al Kharsaah. Both vessels performed exceptionally well during the trials.

Both vessels will operate as part of Nakilat NSW’s growing fleet. NSW currently operates over 30 vessels and performs 12, 500 tug jobs per year.

These vessels will join NSW’s existing vessels in the Port of Ras Laffan. They will be put to use assisting ships entering and departing the port. The Damen ASD 2810, 28 metres long with a beam of 10 metres, has a bollard pull of 45 tonnes andcan travel at a speed of 12.6 knots.

The first two Stan Tug 1606 mooring boats, Ras Al Allaj Qatar and Al Esaiwed, were delivered in August 2014. NDSQ is a joint venture between Qatari gas transport company Nakilat and Dutch shipbuilder Damen Shipyards, two internationally renowned companies at the forefronts of their fields. These strong and reputable companies have made a long-term commitment to the development of the State of Qatar. When NDSQ opened for business in 2010, large-scale shipbuilding was added to Qatar’s industrial economy.

As of February 2015, NDSQ has delivered 24 vessels and has performed 15 refit/repair jobs on mega yachts,  achieving quality of the highest standard. However, while the diversification of Qatar’s economy and the production of high quality products are core values of NDSQ’s operations, our number one priority is safety.
We value each and every one of our workers. They are crucial to our operations and their welfare has direct impact on our business. We invest in the highest levels of safety equipment and education for our workers,  with the view that everyone should go home safe and well.