Hat-trick of wins for ABP and partners… 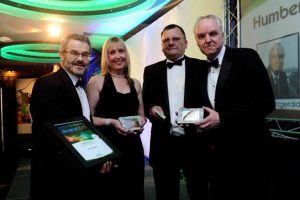 The Hull Daily Mail’s annual Renewables Awards proved a huge success for Associated British Ports (ABP), its largest Humber customer Drax Power Ltd, and project partner GRAHAM Construction after all three organisations were recognised and rewarded for their contribution to the green energy revolution on the Humber.

Judges said: “In such a momentous year for the renewables industry, judges felt it was only right this accolade went to three people who played a key part in bringing Siemens to Hull. Alan Johnson had a huge role behind the scenes, talking to the main players, using his influence to secure political support and never losing sight of the end goal.

“Hull City Council was also important in the deal and Mark Jones’s input was vital. Those who know Mark well say he was always on the job, constantly in touch with decision-makers and tirelessly working to get a result.

“As Humber director for ABP, John Fitzgerald represented the landowner which is hosting Green Port Hull. Without the company’s vision, none of this would be happening.”

On his part in making sure the City’s biggest ever package of inward investment was finally delivered John Fitzgerald said: “The fact that this award has been given to three people demonstrates that the delivery of the Siemens project has been a huge team effort. More than that, it secures ABP’s role in driving forward the green revolution which is creating a whole new energy sector.

“All of us collecting awards tonight represent large teams of people who are, and will continue to, work tirelessly to make sure the project is up and running by 2017. That includes people from ABP, the City Council, Parliament and Siemens themselves, along with everyone else across the city that have supported our vision.

“I’m humbled by the award, which I accept on behalf of everyone at ABP, but more importantly, I’m enormously proud to be involved in an emerging sector that will deliver so many benefits for the people of this City and the Humber region, and will ensure the UK is at the forefront of a renewables future.”

Awards were also handed out to Drax Power Ltd, one of ABP’s largest customers. The company was handed the Renewables Innovation Award for its work converting to low-carbon energy generation, transforming the largest coal-fired power station in north western Europe to predominantly biomass fuelled.

ABP has invested £130 million across the Humber on facilities dedicated handling up to four million tonnes of biomass each year for Drax, to support this conversion.

Those facilities were themselves recognised by the Awards judges when GRAHAM Construction was named as the winner in the Best Renewables Project for their work building the Immingham Renewable Fuels Terminal (IRFT). When complete IRFT will be the World’s largest dedicated biomass handling facility.

GRAHAM Construction is also working as part of a Joint Venture with Lagan Construction Group on the enabling works at Hull’s Alexandra Dock to prepare the site for the Siemens development.

The BDI: 56 points up…during the Ides of March