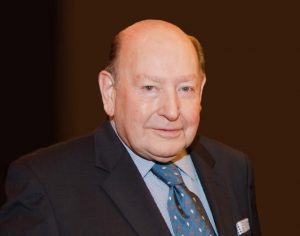 It is with great sadness that we announce the death of Denzil Stuart, a highly respected figure in marine and insurance journalism and public relations consultancy.

Friends and colleagues throughout the industries he knew intimately, and the public relations sphere, will mourn his passing. He was 83.

Despite suffering poor health in the last few years, he continued to serve his client accounts with selfless attention, and to be closely attuned to the latest developments in the insurance and maritime sectors.

Denzil Stuart was a long-time contributor to many publications, including Lloyd’s List, and was latterly the insurance editor of Seatrade magazine for several years, covering all aspects of the marine insurance and P&I markets. Fellow journalists respected the extent of his contacts throughout the London and international markets, which often gave him a head start on key stories.

Denzil’s public relations client list over the years saw him travelling the world. At various times, he represented the huge Hong Kong-based group World-Wide Shipping, the Salvage Association, the American P&I Club, the Strike Club, tanker group NITC, AXA Corporate Solutions, BMT Marine & Offshore Surveys, and other maritime interests. He was consultant and press officer to the International Union of Marine Insurance for eight years until 2012. He represented law firms in the UK (including Ince & Co), Greece and the US, and was closely involved with the biennial maritime trade fair Posidonia.

His first public relations client was Lloyd’s broking group Stewart Smith, later to become part of Matthew Wrightson and then Stewart Wrightson. He particularly admired the head of the broking group, the late George J Stewart.

Denzil spent 10 years as a staff shipping journalist and freelance contributor to Fleet Street papers, including feature writing for the Financial Times.

He was invited by Jim Davis, a leading figure in the maritime and ship finance sectors and currently chairman of the International Maritime Industries Forum, to become the first press officer of what was at the time the world’s biggest shipping group, P&O. And Denzil was the first PR consultant appointed by any shipowners’ protection and indemnity mutual, starting with the UK Club.

Another first was his appointment as PR consultant to the former Institute of London Underwriters, one of the forerunners of the International Underwriting Association. He also organised and moderated the first General Arab Insurance Conference to be held outside the Middle East.

His career was among those featured in June 2013 in the Insurance Day series Power Behind the Throne.